The Biden administration is ending Medicaid work requirements the previous occupiers of the executive branch foisted on the nation's working poor. Two weeks ago, President Joe Biden signed an executive order instructing officials at the Department of Health and Human Services to remove barriers to Medicaid, and that's just what they are doing.

Three states—Arkansas, Kentucky, and New Hampshire—tried to impose the requirements, but two levels of federal courts have struck them down so the order doesn't have immediate effect. But it means no state will be able to create the needless, humiliating, ridiculous hoop of requiring people to prove they're working, all as a means of keeping needy and deserving people from applying for the benefit.

The proof that this measure is intended just to make life more difficult for poor people is in the fact that 93% of people on Medicaid—who aren't ill or disabled, elderly, taking care of family members, or in school full time—already work. Medicaid is there to help all those people, and work requirements have never been about work. 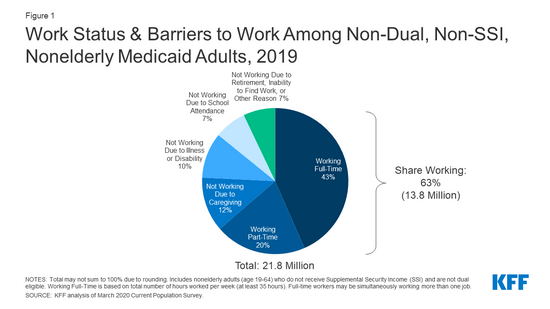 According to the draft plan obtained by The Washington Post, the Centers for Medicare and Medicaid Services "has serious concerns that now is not the appropriate time to test policies that risk a substantial loss of health care coverage or benefits." A global pandemic that has sickened millions of Americans and forced millions more out of work is the wrong time to make health care harder to obtain.

The administration said in the document that the Trump administration had given approval to 13 states to impose the requirements, and 10 others had sought approval. But among them, Arkansas was the only state that followed through, and had removed 18,000 people from the program before a federal judge blocked it. The successful challenges against Arkansas and Kentucky in federal courts resulted in a number of states deciding to forego applying for the work requirement waiver, and in other states Democratic governors took office and halted their predecessors' efforts.