Fox News host Pete Hegseth was paid roughly $10,000 by Republicans in Michigan to speak at a fundraising event with then-Senate candidate John James. Fox News then allowed Hegseth to repeatedly interview James and promote his candidacy on its network.

Hegseth, a Republican who has said that he doesn’t consider himself a journalist, co-hosts Fox & Friends Weekend. ​The Washington Post reported in March that “Hegseth has been a confidant of Trump’s, who watches his Fox News show and frequently calls him to discuss veterans’ policy.” On Fox & Friends, Hegseth interviewed Trump during a rally to support Republican candidates ahead of the midterm elections.

Fox News recently claimed that it “does not condone any talent participating in campaign events,” which is a blatant lie. In reality, Fox News personalities regularly appear at events for candidates and political parties and sometimes get paid to do them. Media Matters reported last month that Fox News host Jeanine Pirro received more than $200,000 in speaking fees from 13 Republican organizations in the past two years. Other Fox News personalities who have headlined GOP events since President Donald Trump took office include hosts Lou Dobbs, Sean Hannity, and Greg Gutfeld, and contributors Sebastian Gorka and Karl Rove.

Hegseth has also cashed in on the Republican speaker circuit: The Livingston County Republican Committee in Michigan paid him to keynote its May 24 Lincoln Day Dinner.

James was the event’s master of ceremonies and introduced Hegseth to the crowd. In his introduction, James noted his own appearances on Fox & Friends and praised Hegseth as “one of the best in the business.” While on stage at the event, Hegseth called James “the real deal” and told the audience to “do whatever you can” to support him.

According to records from the Michigan Department of State, the Livingston County GOP paid a total of $10,239.55 in fees and costs to Premiere Speakers Bureau, which represents Hegseth, between February 7 and July 18 of this year.

Despite that clear conflict of interest, Hegseth repeatedly interviewed James on Fox & Friends Weekend. In the runup to Election Day, Hegseth interviewed James on July 28, September 9, October 14, and October 28. Hegseth did not state during those interviews that he had received money from the Livingston County Republican Party. 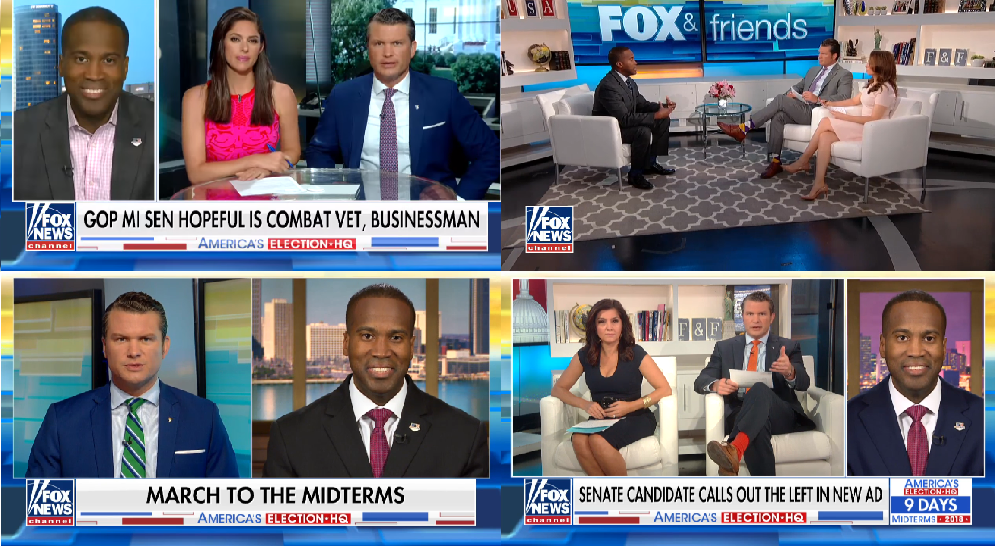 Hegseth used those interviews to repeatedly promote James’ unsuccessful campaign and tout his purported strength as a candidate. For instance:

A request for comment to Fox News was not returned.