Photo by The White House is marked with CC PDM 1.0

Former President Donald Trump urged Americans to take the coronavirus vaccine on Tuesday night. "I would recommend it to a lot of people that don't want to get it — and a lot of those people voted for me, frankly," he said during a Fox News interview with Maria Bartiromo. "It is a safe vaccine and it is something that works." While Trump caveated his comments by saying that "we have our freedoms and we have to live by that," his comments were nonetheless significant because, as he indicated, polls show Republicans are particularly hesitant to take the vaccine.

But Trump's remarks will have an impact only if his supporters hear them. And while his comments originally aired on Fox, that network -- by far the most popular and influential among Trump voters -- has largely ignored them since.

In the 36 hours following Trump's vaccine endorsement, Fox devoted only about six and a half minutes to the remarks. Only a handful of programs covered the remarks; flagship "straight news" broadcast Special Report and popular opinion shows The Five, Tucker Carlson Tonight, and The Ingraham Angle are among those that have not aired or referenced the comments.

Sean Hannity became the only Fox prime-time host thus far to discuss Trump's vaccine endorsement when he briefly mentioned it (without playing the clip) on Wednesday night. But that aside came in the context of criticizing mainstream media for "chastising" Republicans for not wanting to get vaccinated.

Hannity, to his credit, said that he personally plans to get the shot and acknowledged Trump's comments, but then pivoted to arguing that "it isn't really anyone's business" who gets vaccinated and that "you need to make your own decision" no matter what liberals say.

It's not hard to tell when Fox's hosts and executives want the network's viewers to hear a politician's comment -- the clip will air over and over again across the network's programming, interspersed with segments dissecting it.

Fox ran roughly 1 hour and 20 minutes of coverage about the purported controversy over the following 36 hours — 12 times as much coverage as it later devoted to Trump's vaccine endorsement. The "Neanderthal" commentary spanned almost the entire Fox lineup during that timespan, with several shows featuring multiple segments of discussion.

Fox could have treated Trump's comments with the same urgency that it did a random Bidenism, using the network's megaphone to encourage their viewers to be safe. But Fox's hosts are apparently more interested in making their audiences feel victimizedthan they are in keeping viewers healthy and alive, and its executives, including the Murdochs, are willing to let them as long as the money continues rolling in. 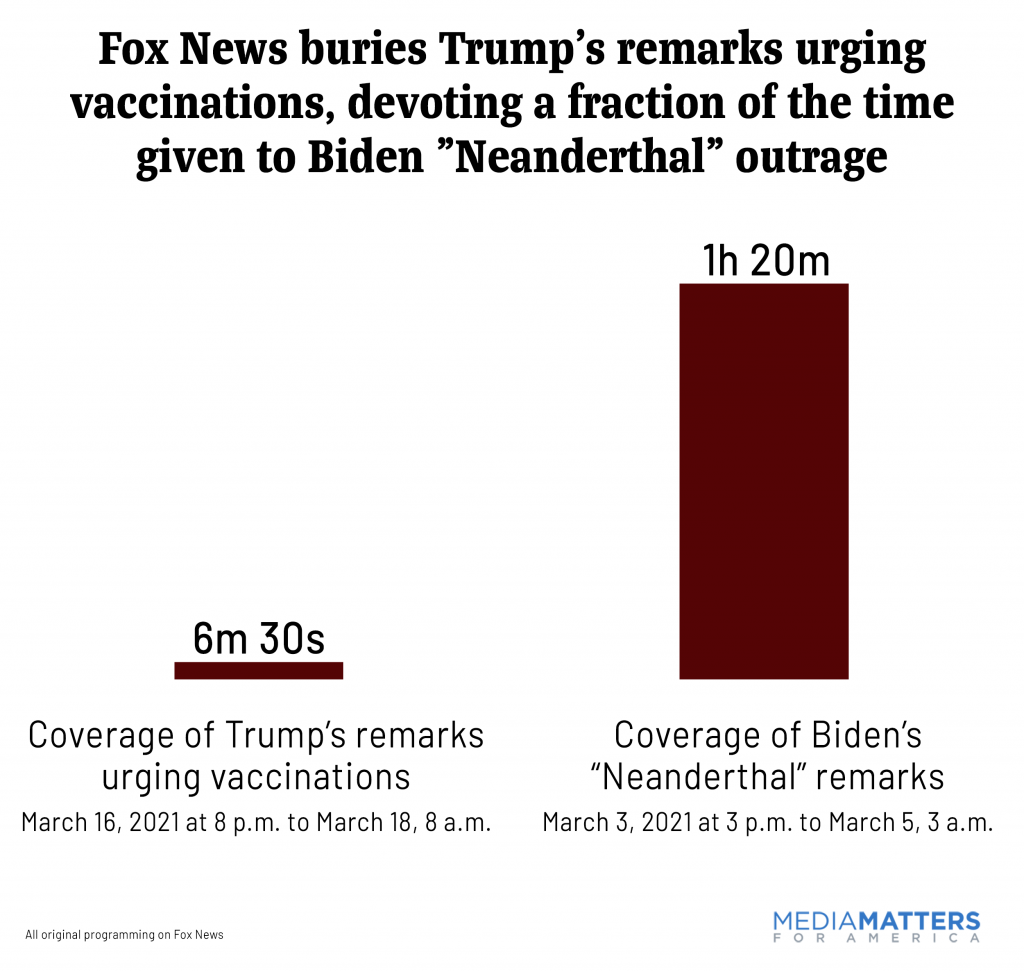 I keep coming back to this because it's true: Fox has a unique moral responsibility, having successfully convinced viewers not to believe anything mainstream news outlets report. There are vanishingly few other vehicles available to reach the network's audience with critical public health information. The network could be trying to create a permission structure to help viewers decide to take safe, effective shots in order to drastically reduce their personal risk from a deadly virus that has killed more than 530,000 Americans.

But Fox is instead failing its viewers, as it has throughout the pandemic. The network's most popular hosts would rather pander to anti-vaxxers for ratings and clout than tell their viewers, "I am going to get vaccinated, just like our founder Rupert Murdoch did, and you should too."

It's disgusting and cowardly and everyone involved should be ashamed.

Media Matters searched transcripts in the SnapStream video database for all original programming on Fox News Channel for any variation of the term "vaccine" within close proximity of the term "Trump" from March 16 through 8 a.m. EDT March 18, 2021.

We also searched the transcripts in the SnapStream video database for all original programming on Fox News Channel for the term "Neanderthal" from March 3 through March 5, 2021.

We included any instances that fell within the first 36 hours after Biden and Trump's comments. We rounded all times to the nearest half-minute.