The Republican Party's descent into the quagmire of far-right conspiracism deepened Tuesday night in Delaware when Lauren Witzke, a onetime QAnon cult promoter with ties to white nationalists, notably through her former campaign manager, won the Delaware GOP primary for a U.S. Senate seat.

Although she distanced herself in January from the QAnon cult—saying it was "more hype than substance," but in even more conspiratorial terms calling the conspiracy theories "mainstream psyops to get people to 'trust the plan' and not do anything"—her agenda remains deeply radical, including a 10-year moratorium on immigration that is rooted in the nativist/white nationalist radical right. She will face Democratic incumbent Sen. Chris Coons in the November general election.

A number of Republican nominees in 2020 are vying for congressional seats: In Oregon, Jo Rae Perkins, who has demanded that Trump declare martial law in her state, faces incumbent Democratic Sen. Jeff Merkley in November. In Georgia, Republican nominee Marjorie Taylor Green, who has voiced support for QAnon but also distanced herself from the cult, appears to be a shoo-in to win the state's 14th congressional district. In Colorado, GOP nominee Lauren Bobert, who has inconsistently supported QAnon theories, is the nominee for the state's 3rd congressional district.

All told, some 23 Republicans who have voiced support for the cult will be on November's ballot. Many of them have later backed away from that support, while others—notably Perkins and Green—have doubled down on their supporWitzke shows off her QAnon t-shirt at a Delwar

As with most of the Republicans who have done so, Witzke's attempts to distance herself from QAnon have been at best half-hearted and unconvincing, largely because her previous support was so vocal and deeply connected to even more unseemly elements of the conspiracist far right.

Throughout most of 2019, she avidly tweeted out QAnon content, particularly the cult's "Where We Go One We Go All" slogan as the #WWG1WGA hashtag. She also was photographed wearing a QAnon shirt at a campaign event. She has moreover openly identified with the "America First" agenda, first touted by Donald Trump but now largely the purview of white nationalists.

Her former campaign manager, Michael Sisco, is even more problematic. Sisco, who has actively voiced support for supplanting American democracy with a monarchy, worked alongside Witzke in the GOP's Iowa field office as the campaign manager for congressional candidate Bobby Schilling until he was fired by the Schilling campaign for organizing an event in Bettendorf featuring white nationalist provocateur Nicholas Fuentes. Witzke then went on to hire Sisco, with whom she was reportedly also involved romantically. 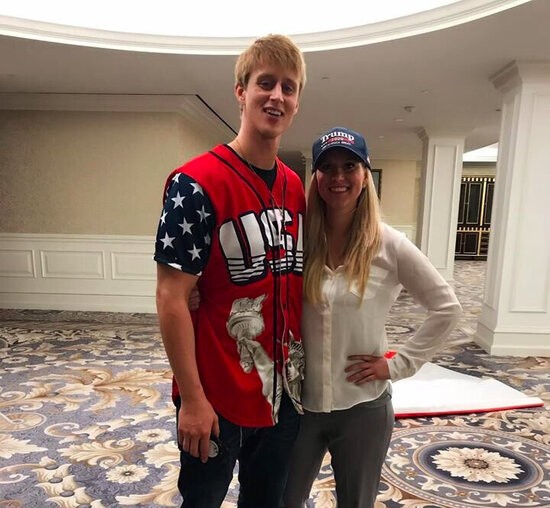 During their work together in Iowa, Sisco and Witzke—who was involved with Trump's get-out-the-vote efforts in Iowa as a GOP field coordinator—assembled a number of events featuring anti-Semitic QAnon figure Dylan Wheeler, who has developed a massive social-media following by mixing QAnon conspiracism with classic white nationalist tropes, particularly the so-called "Jewish question."

Sisco appears to have departed the Witzke campaign sometime in early July.

Witzke herself has a long track record of dalliances and alliances with white nationalists. She has retweeted a pro-"Groyper" account, @GroypSC, which regularly posts racist and anti-Semitic content. In January, she followed a number of white nationalists on Twitter including Faith Goldy, Vincent Foxx, anti-Semite E. Michael Jones, Peter Brimelow, Nick Fuentes, Bronze Age Pervert, and Scott Greer, as well as designated hate groups such as the Federation for American Immigration Reform and RedIce, and an account that primarily regurgitates content from the white nationalist site American Renaissance.

Witzke's current list of figures she follows on Twitter has dropped most of these accounts, but still includes several "Groyper" accounts as well as an account dedicated to "helicopter rides" (a reference to the memes promoted by far-right street brawlers urging the revival of government techniques for eliminating political opponents lethally, first deployed by former Chilean dictator Augusto Pinochet), as well as white nationalist figure Lauren Southern.

She also has a long history of far-right radicalism. In April 2019, she took part in a rally at the Washington, D.C. Trump Hotel for the so-called "Deplorables Tour," and spoke at length to the audience, including her tale of recovery from addiction to heroin and methamphetamine. From that, she pivoted to ardent support for Trump's efforts to build a wall on the U.S.-Mexico border.

"There has been an assignment to wipe out my generation, but I will not stand by and let this continue. … Our God is a God of order. God establishes the borders of nations. Our nation is built on biblical principles. And there is an agenda for decades to dismantle the unity of our people and to provoke chaos," Witzke said.

"I know without a shadow of a doubt that the Lord anointed Donald J. Trump in times such as this to restore our nation into order," she added. "He has assigned this man to this position to re-establish the order of this country."

From Your Site Articles
Related Articles Around the Web
lauren witzke