Roseanne Barr, star of the now-canceled ABC sitcom Roseanne and prominent supporter of President Donald Trump, took to Twitter on Monday to make the racist suggestion that Valerie Jarrett, former adviser of President Barack Obama, was a product of the Muslim Brotherhood and the Planet of the Apes. Her tweet prompted celebrations among right-wing trolls, in part because she has become a useful amplifier of the extremism, conspiracy theorizing, and racism that can be found in certain online platforms. 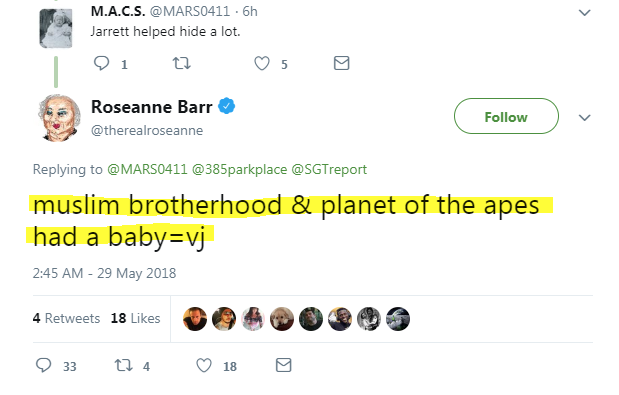 After receiving criticism on Twitter, Barr tried the defense right-wing media figures often attempt following racist remarks: claiming it was a joke. When that didn’t stop the backlash, Barr attempted another apology: 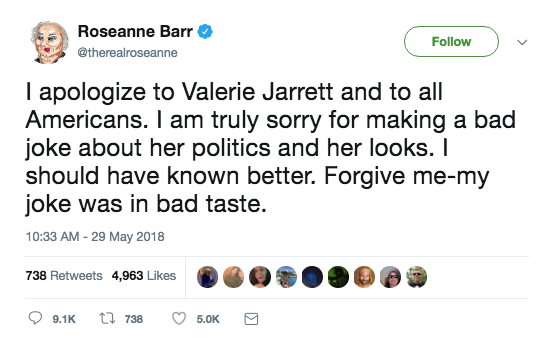 However, the apology feels empty, not only because Barr has tweeted racist comparisons of black people to apes before, but also because of Barr’s record of using Twitter to amplify far-right conspiracy theories, including Pizzagate and the pro-Trump fake narrative known as #QAnon. The #QAnon narrative claims Trump has a master plan in motion to kneecap members of the “deep state” and dismantle pedophilia rings with links to powerful politicians and celebrities. And #QAnon and Pizzagate aren’t the only insane right-wing talking points Barr is recycling. As recently as this morning, she broadcast a false, anti-Semitic attack on George Soros in an attempt to smear Chelsea Clinton, a “heinous lie” that earned her a retweet from one of the president’s sons, Donald Trump Jr. 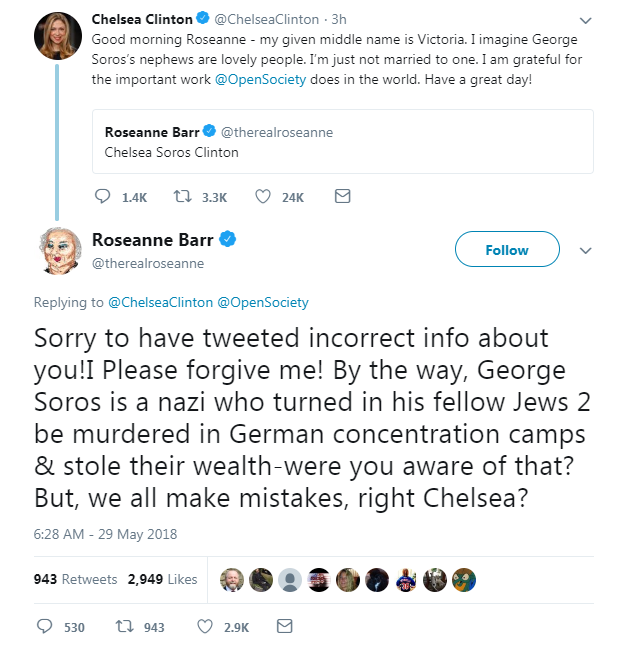 Right-wing trolls on the 4chan message board /pol/ (known as “politically incorrect”) are in the habit of calling people who they feel represent their values “/our guy/” or “/our girl/,” and a 4chan member celebrated Barr’s anti-Semitic tweet, referring to her as “our girl” (and not for the first time). 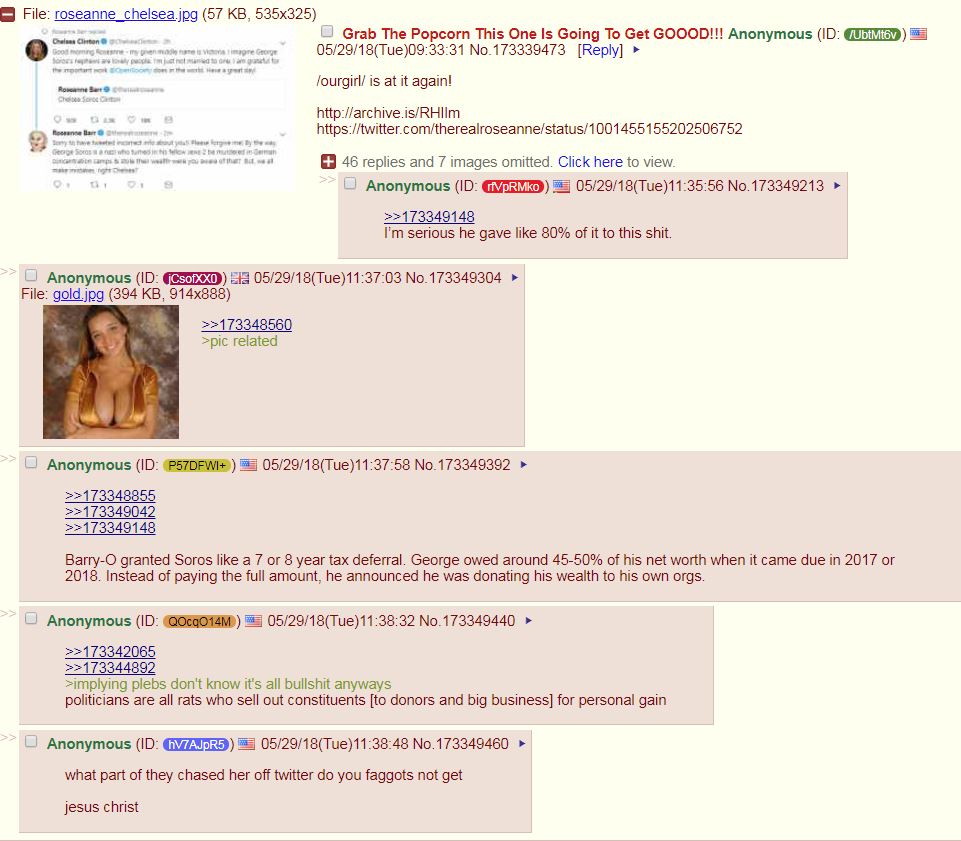 Barr’s tweets have proven she is “our girl” to 4chan trolls, not only because her tweets are reflective of the kindof content that can be found on these sites at all times, but also because she sometimes amplifies users’ narratives by literally disseminating the screen captures of actual 4chan posts. On a now-archived 4chan thread from May 15, users pointed out that Barr has tweeted screenshots clearly obtained from the message board: 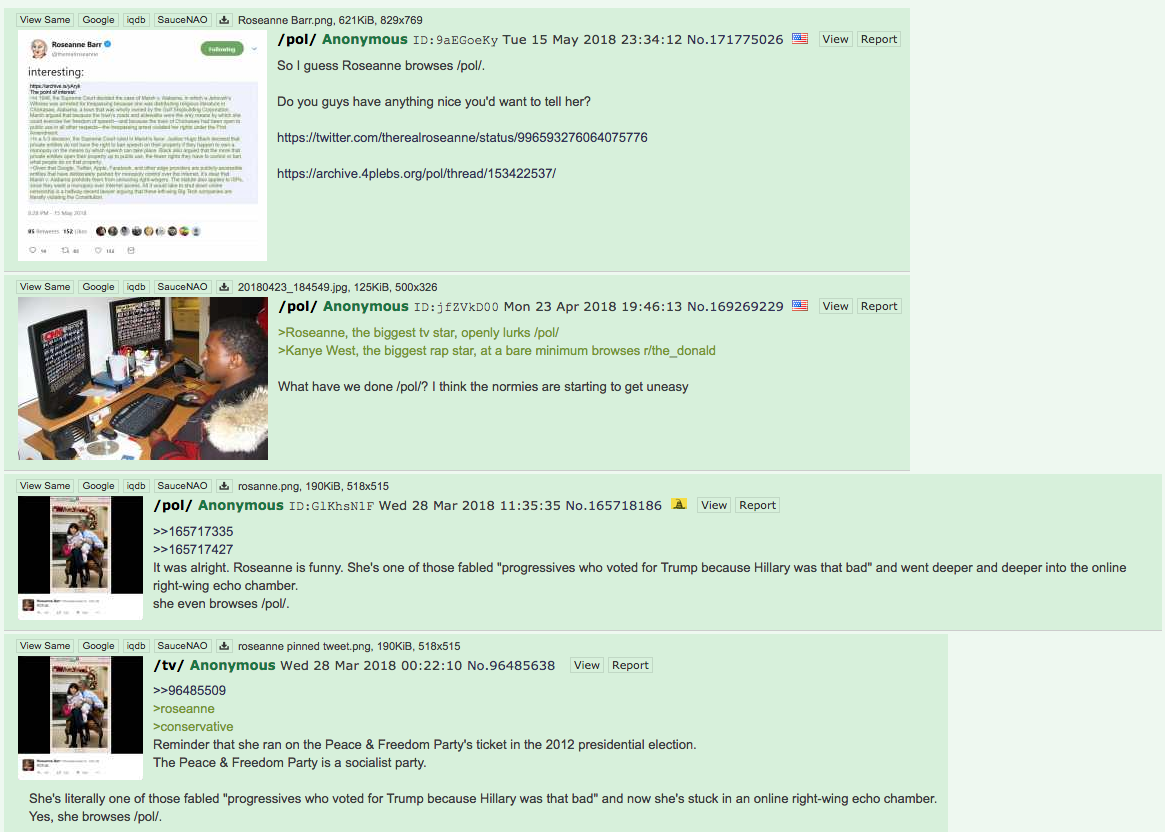 And Barr’s Twitter feed isn’t the only pipeline to the mainstream for conspiracy theories and extremist and racist content from sites like 4chan. Fox’s Tucker Carlson has dedicated airtime during his prime-time show Tucker Carlson Tonight to defending a racist campaign that originated on 4chan. Trump Jr. also has a history of amplifying content linked to 4chan. And whether wittingly or not, de facto presidential advisor Sean Hannity has also amplified #QAnon content on his Twitter. The content of fringe message boards like 4chan and 8chan is seeping into mainstream narratives, and right-wing figures are to blame.