No, thanks
Tag: truck convoy

As Canada’s capital Ottawa declares a state of emergency in the second week of disruptive protests by trucker drivers opposing the country's vaccine requirements, American truckers — with the assistance of right-wing media and far-right figures — are planning similar protests for Washington, D.C. to protest COVID-19 vaccine mandates. Organizers of the convoy are promoting it across social media, including Facebook groups, Telegram channels, and TikTok accounts, and some have appeared on Fox News and Newsmax to promote “the People’s Convoy.”

The convoy in the U.S. has been planned entirely online, and participants are expected to start from California and head toward D.C. on March 5. This convoy comes amid some Americans’ involvement -- including participation, funding, and organization -- with the Canadian “Freedom Convoy,” as truckers and their supporters have protested at the Canada-U.S. border in Michigan and Montana, shutting down highways and bridges between the two countries.

As the Canadian convoy garnered attention from right-wing media, including on Fox News, American truckers and right-wing figures started organizing similar convoys, mainly on Facebook and Telegram. Facebook user Brian Von D changed the name of his existing group “Save the Flag 2020” to “CONVOY TO DC 2022,” gathering American truckers on social media, including Jeremy Johnson, Mike Landis, and Brian Brase, who have become the “faces” of the convoy. While this group was removed by Facebook for “repeatedly violating our policies around QAnon” and Von D claims he is no longer affiliated with the convoy, the group’s other organizers and spokespeople had gained a sufficiently large following and recognition by then to merge with other similar groups and relaunch across social media platforms as “The People’s Convoy.”

The figures are now organizing on Facebook and TikTok, both of which have been choice platforms for anti-vaccine mandate organizing (despite their COVID-19 and vaccine misinformation policies). They are also using Telegram, which has become a home for right-wing extremists and misinformers. Far-right figures such as Gab CEO Andrew Torba, Stop the Steal organizer Ali Alexander, and a local chapter of the far-right gang Proud Boys have also promoted efforts to organize the convoy.

In addition to their favorable coverage of the Canadian convoy, right-wing media, especially Fox News, have have amplified efforts to organize the U.S. convoy. Fox has hosted Johnson, Landis, and Brase, with Brase being featured as a guest four times on these Fox News’ shows: Hannity, Fox & Friends, and Tucker Carlson Tonight.

Organizers Are Using Facebook To Gain Support For The Convoy

On January 27, the Facebook group “Save the Flag 2020” changed its name to “CONVOY TO DC 2022” and exploded in membership, garnering over 130,000 members before the group was shut down on February 1. According to Facebook, it removed the page “for repeatedly violating our policies around QAnon.” But Johnson, Brase, and Landis appeared on Fox and laughed off the suggestion that the group’s suspension had something to do with QAnon discussion.

Although Facebook removed the “CONVOY TO DC 2022” group, Media Matters found another 20 groups about the convoy with over 200,000 total members. One of these groups, with almost 24,000 members, is run by Von D, even though he’s claimed he is no longer a part of the convoy.

Two main organizers, Brase and Kam Johnston Tonn, have merged their efforts to launch the newly rebranded “The People’s Convoy.” Brase is a trucker with a following on TikTok who, among others, was supposedly brought on to be one of “the faces of the movement” because they are “well-known [in] the trucking industry,” and Tonn has created her own convoy Facebook page and associated Telegram group under the same “The People’s Convoy” brand.

Brase has also used his TikTok account, which has over 25,000 followers, to promote the convoy. This has prompted other users to further disseminate the information about it— adding to the many TikToks in support of the Canadian convoy and Ottawa protests already on the platform.

Telegram, a popular messaging platform notorious for its minimal content moderation policies, has quickly become another venue for organizing the convoy groups. Media Matters found at least 15 Telegram groups and channels promoting American convoys to the capital with a combined 250,000 members, with the largest group containing over 80,000 members.

“The People’s Convoy” follows a similar playbook of organizing on Telegram as used by far-right campaigns over the past year. The group has a centralized national channel and has also promoted state-specific groups chats in an attempt to encourage local organizing and calls to action. This tactic is reminiscent of QAnon influencer-led campaigns to coordinate election “audits” and canvasses, anti-mandate lawsuits and school board protests.

The group’s use of Telegram resulted in a variety of far-right users quickly joining the convoy channels due to easy cross-promotion on the platform. Media Matters research has found that several white nationalists, QAnon followers, members of Proud Boys and Three Percenters, and other self-identified militia members have joined many of the popular Telegram convoy group chats. 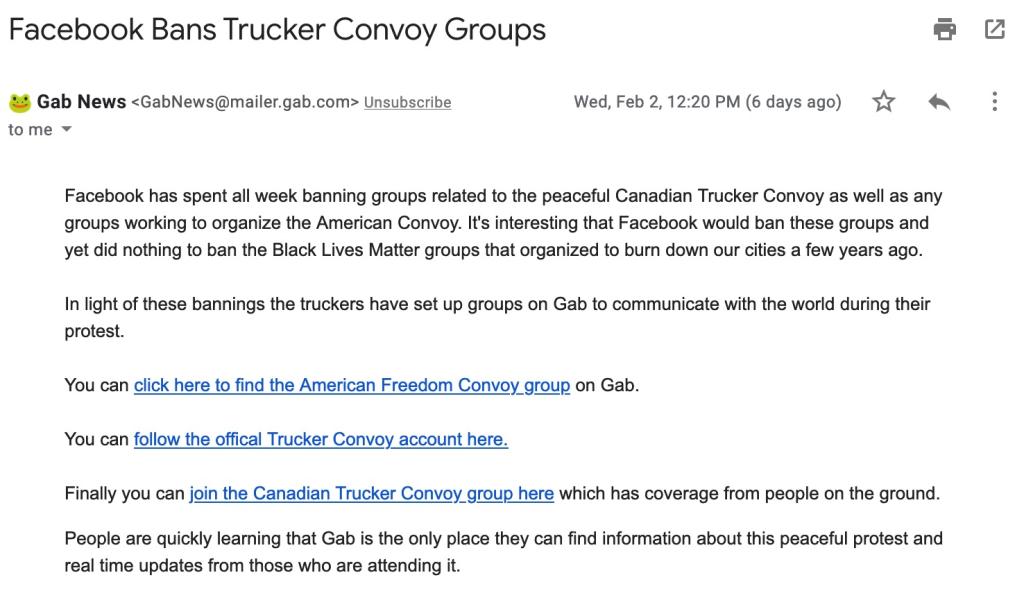 Even former President Donald Trump attempted to capitalize on the Facebook group’s initial suspension to advertise his yet-unreleased social media app, Truth Social, in a statement praising “American Truckers.” But the app will not even be available prior to the convoy dates in March due to recent launch delays.

Fox News has championed the convoy of far-right truckers in Canada, which has both disrupted the capital city of Ottawa and shut down trade across the U.S.-Canada border. Meanwhile, the network has begun to tar any opponents of the convoy as out-of-touch elites — in fact, Fox News seems to have no idea what the average Canadian, or even the average Canadian trucker, really thinks about the situation.

While it’s trying to cultivate a convoy movement in the United States — similar to the network’s efforts to bolster the Tea Party movement in 2009 — Fox is disregarding ample evidence that the Canadian people do not support the trucker convoy.

Opinion polling in Canada shows widespread opposition to the demonstrations. From the beginning, truckers in Canada have spoken out against the convoy, and have pointed out how it is not addressing “critically important” issues affecting the industry’s workers, such as safety and wage theft. Furthermore, the illegal blockading of border crossing zones such as the Ambassador Bridge elsewhere in Ontario has only created trouble for the truckers who are still doing their jobs.

In a new development Thursday, the leadership of the Conservative Party of Canada called for the protesters in Ottawa and the blockaders elsewhere to go home — a stark reversal from last week when caucus members openly courted the Ottawa convoy’s support.

Some of the cracks in Fox’s pro-convoy narrative occasionally show. For example, on Wednesday’s edition of America Reports, guest co-anchor Gillian Turner cited criticism that Prime Minister Justin Trudeau is an “elitist” fighting with blue-collar workers. But then co-anchor John Roberts, who is originally from the Toronto area, pointed out that it was “interesting” how Doug Ford, the conservative premier of Ontario (a similar office to a U.S. governor), was also against the trucker convoys.

On Thursday’s edition of Outnumbered, co-host Harris Faulkner noted that 90 percent of Canadian truckers are in fact vaccinated, but maintained that the demonstration was a matter of principle. Liberal guest Laura Fink pointed out, however, that the convoys did not have the support of most truckers, and that this was “a loud and vocal minority,” warning them that “you have to have the public on your side” before stopping other people’s businesses.

But it was Fink who was outnumbered here, and she was quickly shouted down by the others.

Co-host and former Trump administration press secretary Kayleigh McEnany countered: “I do have a data point for you, Laura. This is the data point: The GoFundMe page was approaching before it was shut down, $10 million of funds were raised … That is more than every single Canadian federal political party in the last quarter of 2021.” (This might be because the donations to the convoy have been coming heavily from donors in the United States, a practice that would be illegal for Canadian political parties.)

Fink later pointed out that Teamsters Canada has vociferously opposed the convoys, leaving the minority of truckers to represent themselves. Fox’s purported “news side” anchor Harris Faulkner, however, diverted the conversation to instead repeatedly push a lie that GoFundMe was keeping donation money after shutting down the fundraiser on its platform. (In fact, the details over GoFundMe’s refund policy had already been sorted out days ago, with the company switching to automatic refunds instead of an earlier plan to send refunds on request.)

Co-host Emily Compagno also declared that the litany of facts that Fink recited “unfortunately to me reflects frankly the bias and that sort of over-generalized narrative” from mainstream media and Canadian leadership. She also countered: “I was a federal attorney, which meant I was unionized. So I know what it's like to be falsely represented by a union that absolutely does not represent my views.” Compagno was silent, however, on the views of all the other truckers who are still attempting to do their jobs.

At the conclusion of the conversation, McEnany declared: “The political elites are so far out of touch with the people, and we are at that point. And we’ve seen those moments in history … We are at that point again, where people are so fed up with the anti-scientific pandemic peddlers in the White House, that they're saying, ‘We are going to make our voice heard through the honking of trucks, through showing up at school boards and standing up against mandates’ — not vaccination, mandates.”