How A Trump Tweet Mobilized His January 6 Insurrection Mob

At the time, it just seemed like another in a series of increasingly unhinged tweets emanating from the White House. But in retrospect, it has become increasingly clear—importantly, to the House Select Committee, as the New York Times reports—that Donald Trump’s tweet of December 18, 2020, was a call to arms for his army of uncivil warriors, telling them when and where to come to prevent his removal from office as a result of losing what he falsely claimed was a fraudulent election.

The tweet cited a report by his minion Peter Navarro (thoroughly debunked in short order) in the Washington Examiner claiming there was enough fraud in key battleground states to swing the election. “Statistically impossible to have lost the 2020 Election,” he claimed, and exhorted his readers: “Big protest in D.C. on January 6th. Be there, will be wild!” 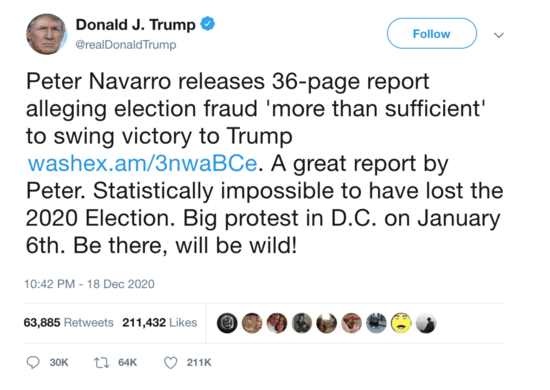 As we reported at the time, a broad bandwidth of Trump supporters—including violent neo-fascists like the Proud Boys and heavily armed “Patriots” such as the Oath Keepers—promptly leapt into action, preparing to come to Washington to prevent their “Glorious Leader” from being swept from office. And they not only heard Trump’s call, they responded just as he had hoped they would—by putting Congress under physical siege and attempting an insurrection.

Subsequently, evidence released by the Justice Department in the 700-plus court cases filed so far in the insurrection substantiates that Trump’s tweet played a central role in attracting a mob numbering in the tens of thousands to Washington—and not just any mob, but one prepared to use violence to prevent the certification of the Electoral College votes that day. And among those were people, notably those same Oath Keepers and Proud Boys, who had very specific plans for achieving that goal.

The Times notes that the evidence clearly shows the electrifying effect the tweet had on Trump’s far-right troops:

Extremist groups almost immediately celebrated Mr. Trump’s Twitter message, which they widely interpreted as an invitation to descend on the city in force. Responding to the president’s words, the groups sprang into action, court filings and interviews by the House committee show: Extremists began to set up encrypted communications channels, acquire protective gear and, in one case, prepare heavily armed “quick reaction forces” to be staged outside Washington.
They also began to whip up their members with a drumbeat of bellicose language, with their private messaging channels increasingly characterized by what one called an “apocalyptic tone.” Directly after Mr. Trump’s tweet was posted, the Capitol Police began to see a spike in right-wing threats against members of Congress.

At least one member of the Oath Keepers—the leaders of the group’s Florida chapter, Kelly Meggs—boasted the next day:

Well we are ready for the rioters, this week I organized an alliance between Oath Keepers, Florida 3%ers, and Proud Boys. We have decided to work together to shut this shit down

Meggs posted another message three days later referencing Trump’s December 19 tweet. Meggs wrote: “He wants us to make it WILD that's what he's saying. He called us all to the Capitol and wants us to make it wild!!! Sir Yes Sir!!! Gentlemen we are heading to DC pack your shit!!"

A few days later, on December 26, Meggs messaged his cohorts that they were targeting January 6 for an “insurrection”: “Trumps staying in, he’s Gonna use the emergency broadcast system on cell phones to broadcast to the American people. Then he will claim the insurrection act.”

“That’s awesome,” someone replied. “Any idea when?”

“Next week,” Meggs answered, adding: “Then wait for the 6th when we are all in DC to insurrection.”

Within days, Alexander took a leading role in organizing protests on January 6, teaming up with Amy Kremer and other mainstream Republican operatives to make them happen. There wound up being four different pro-Trump events in Washington that day; the one overseen by Alexander was called the “Wild Protest,” for which you could get the details at his wildprotest.com website.

Oath Keepers founder Stewart Rhodes—who now stands charged with seditionist conspiracy for his actions on January 6 and those leading up to it—had been a featured speaker at the first “Stop the Steal” rally on December 12, exhorting the crowd: “He needs to use that now, he needs to invoke the Insurrection Act and suppress this insurrection,” adding: “If he does not do it now, while he is commander in chief, we are going to have to do it ourselves later, in a much more desperate, much more bloody war.”

Trump’s tweet raised Rhodes’ hyperbole to new heights; on December 21, he warned in an interview that there would be “a massively bloody revolution” if Joe Biden took office. Two days later, he posted a letter saying that “tens of thousands of patriot Americans” with “mission-critical gear” stashed nearby would be in Washington on January 6.

A December 27 email from stopthesteal.us, headlined “TRUMP JUST TWEETED JAN 6TH EVENT! AGAIN!” encouraged followers to attend, directing them to Alexander’s “Wild Protest” site. “PRESIDENT TRUMP WANTS YOU IN DC JANUARY 6,” it emphasized, adding that the organization was working to secure the votes of Republican Senators to oppose Biden’s certification: “We’ve identified six (seven including Senator-elect Tommy Tuberville) that could join our cause. StopTheSteal.us is working closely, whipping the vote up, with patriots in the Congress.”

As Media Matters reported, some two dozen GOP officials and organizations in at least 12 states used Facebook as a platform to organize bus trips to the rally. The posts advertising the buses were unsparing in the use of incendiary rhetoric, too.

“This is a call to ALL patriots from Donald J Trump for a BIG protest in Washington DC! TAKE AMERICA BACK! BE THERE, WILL BE WILD!” wrote the New Hanover County GOP of North Carolina in a Facebook post advertising bus seats. (The phrase “be there, will be wild!” was a rallying cry by Trump to his followers for that day.)

December 27: “See you in Washington, DC, on January 6th. Don’t miss it. Information to follow.”

Trump’s tweets and the rush of organizing that followed gave the green light to the would-be uncivil warriors. “On January 6, we find out whether we still have a constitutional republic,” one MAGA fanatic tweeted on New Year’s Eve. “If not, the revolution begins. I’d rather fight and die than live in a socialist society. Pretty sure 80 million Americans feel the same way.”

In the leadup, QAnon accounts grew excited. More than half of the 20,800 QAnon-identified accounts on Twitter mentioned the date and the rally, though only a minority called for violence. Rather, most of them posted their typically outlandish claims intended to outrage and inflame readers.

“No wonder the President said January 6 in DC was going to be wild. @LLinWood just told us many of our politicians are raping and killing children. They won’t be able to walk down the street,” one QAnon account on Parler posted.

When the day arrived, the thousands drawn to D.C. were primed for action. The big event on January 6 was the “March to Save America” at the White House Ellipse, at which Trump spoke. There were other rallies scheduled to follow: Ali Alexander’s “Wild Protest,” scheduled to take place northeast of the Capitol; and three variations on “Stop the Steal” rallies at Freedom Plaza, just east of the White House. These later events were largely short-circuited by the insurrection, as the crowds fled the venue to join the scene at the Capitol.

The tweet inspired a broad swath of conspiracies unconnected to the Oath Keepers or Proud Boys, usually involving only a handful of actors. In one such case, according to the indictment, a trio of extremist Trump supporters from California traveled to Washington, in their own words, to “violently remove traitors” and “replace them with able bodied Patriots.” Embroiled with the mob on the Capitol’s western entrance, one of them tazed Metropolitan Police Officer Michael Fanone into unconsciousness, while another encouraged the mob to climb in through broken windows; once inside, the trio trashed congressional offices.

The three of them apparently met on a Telegram channel called “Patriots 45 MAGA Gang,” where they shared Trump-related conspiracy theories and agreed that action needed to be taken to prevent Trump from being unseated as president. Two days later, local Trump activist named Edward Badalian asked the channel, “okay who is down to drive to DC on Jan4?” The next day, he opined that “we need to violently remove traitors and if they are in key positions rapidly replace them with able-bodied Patriots.”

“We gotta go handle this shit in DC so the crooked politicians don’t have an army of thugs threatening violence to back their malevolent cabal ways,” wrote Badalian in one thread.

“We are taking this shit back,” Badalian wrote in another thread. “Yeah, absolutely, yes,” replied Daniel Rodriguez, another local Trumpist.

In other conversations, Rodriguez told his cohorts that he would “assassinate Joe Biden” if he got the chance and “would rather die than live under a Biden administration.” On December 29, Rodriguez posted: “Congress can hang. I’ll do it. Please let us get these people dear God.”

The trio gathered weapons and gear—a stun gun, pepper spray, gas masks, and walkie-talkies—in the weeks before January 6. Badalian and Rodriguez traveled together from California, and "joined a caravan" in Kentucky on January 5 headed to the Stop the Steal event, setting up caravan communications with a radio app on cellphones.

When they arrived in Washington, Rodriguez texted his cohorts on Telegram: “There will be blood. Welcome to the revolution.”

After battling police, the trio entered the Capitol and trashed congressional offices. Two of them went on Alex Jones’ Infowars program two days later and blamed all the violence on “antifa,” while falsely claiming they had not gone inside or participated in the violence.

From Your Site Articles
antifa

Donald Trump is poolside at Mar-a-Lago, waving to guests as they go by.

Ever since the Republican party was hijacked by a clownish, failed businessman and reality tv host turned fascist dictator, many on the left have pined for the simpler days of George W. Bush. Putting aside his obvious failure of a lifetime in launching a brutal, unnecessary, and costly war in Iraq, the not-so-bright former president would probably be considered a leftist by today's deranged Republican party of rabble-rousing misfits. Stephen Colbert, like many of us comedians at the time, took great pleasure in jostling George Bush over his failures in Iraq.

Although he has since dropped his more arcane Colbert Report far-right character after taking over hosting duties at the Late Show, Colbert is as political as ever. Having been said, Colbert mocked George W Bush, who gave a speech in Dallas on Wednesday for an event called “Elections – A More Perfect Union”, which focused on how elections work.

'Shoot Yourself In The Legs': Russian Troops Mutiny In Ukraine