Mother Jones’ David Corn obtained a March 3 memo produced by a Russian government agency and distributed by the Kremlin to Russian media outlets instructing broadcasters to use as many clips of Fox primetime host Tucker Carlson as possible.

Media Matters has published research showing dozens of times of Carlson promoting a pro-Kremlin, anti-Ukraine line on his show going back years. That trend has only accelerated in recent weeks.

The March 3 memo, sourced by Corn to “a contributor to a national Russian media outlet” and titled “For Media and Commentators (recommendations for coverage of events as of 03.03),” reveals that Carlson’s inclusion on Russian airwaves along is a directive from the government and will not stop anytime soon:

On March 3, as Russian military forces bombed Ukrainian cities as part of Vladimir Putin’s illegal invasion of his neighbor, the Kremlin sent out talking points to state-friendly media outlets with a request: Use more Tucker Carlson.
“It is essential to use as much as possible fragments of broadcasts of the popular Fox News host Tucker Carlson, who sharply criticizes the actions of the United States [and] NATO, their negative role in unleashing the conflict in Ukraine, [and] the defiantly provocative behavior from the leadership of the Western countries and NATO towards the Russian Federation and towards President Putin, personally,” advises the 12-page document written in Russian. It sums up Carlson’s position: “Russia is only protecting its interests and security.” The memo includes a quote from Carlson: “And how would the US behave if such a situation developed in neighboring Mexico or Canada?”
The document—titled “For Media and Commentators (recommendations for coverage of events as of 03.03)”—was produced, according to its metadata, at a Russian government agency called the Department of Information and Telecommunications Support, which is part of the Russian security apparatus.

This memo also encourages the spread of a variety of other points of Kremlin propaganda seeking to justify the war in Ukraine. Corn included a partial image of this memo referencing Carlson and Fox News: 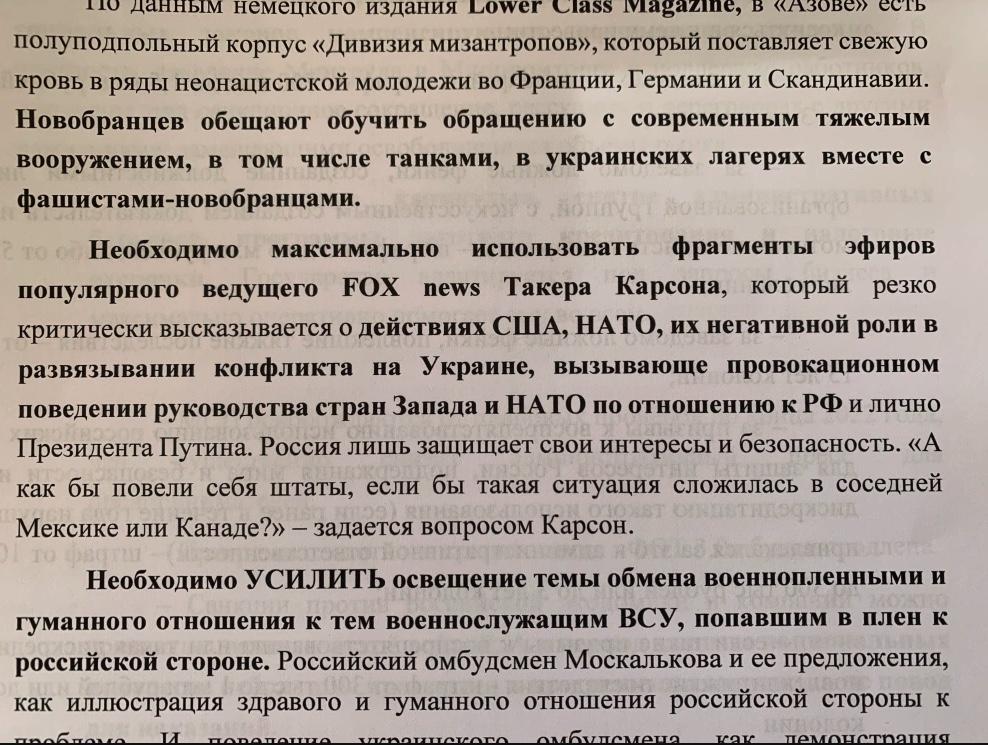 Corn additionally referenced a March 10 “recommendations for coverage” Kremlin memo that also promotes Carlson. That additional memo promotes conspiracy theories about biological research facilities in Ukraine that Carlson had amplified in part despite it being debunked on other Fox News programs by reporter Jennifer Griffin. As Corn notes, that memo “advises Russian journalists to cite Carlson on another matter: how the economic sanctions imposed on Russia would harm Americans.” Corn notes that Carlson was “the only Western journalist” named in that memo as well.

Corn concludes that Kremlin-aligned media like RT needed no incentive to feature Carlson, even before these memos. Indeed, Russian state media have used Carlson’s statements to counter the narrative that American media’s perception of Russia is largely negative. Translated clips of Carlson appeared on Russian television almost a month before the invasion.

Carlson has a long history of pushing pro-Russian and anti-Ukraine talking points on his show. In 2019 Carlson said, “Why do we care so much” about “Russia messing around in Ukraine, or Estonia, Crimea or whatever?” finally ending with, “Why wouldn’t we be friends with Russia?” After the large-scale invasion of Ukraine, Carlson has railed against demonetizing and banning Russian state media from any platform, mocked bipartisan support for Ukraine and its president Volodymyr Zelensky, and said that any aid to Ukraine should be conditional on funding being added to border security on the United States’ southern border. Just days ago, Carlson accused the United States of running a “disinformation campaign” against Russia.

From Your Site Articles
tucker carlson