With Rep. Steve Scalise in trouble for sharing a faked video of activist Ady Barkan, you'd think that the White House would try to avoid the completely faked video market right now. White House director of social media and deputy chief of staff Dan Scavino, JrScavino is aiming to prove that assumption wrong.

This is fake. You know how I know? I was the coanchor in studio. We were interviewing Harry Belafonte. https://t.co/gPRU9JGyI7
— John Dabkovich (@John Dabkovich)1598879466.0

The White House's social media guru took to social media to share something that had been completely manipulated -- a video depicting Joe Biden falling asleep in a TV studio.

Twitter was nice enough to label the tweet as "manipulated." The ask for money with a text location remained, however. 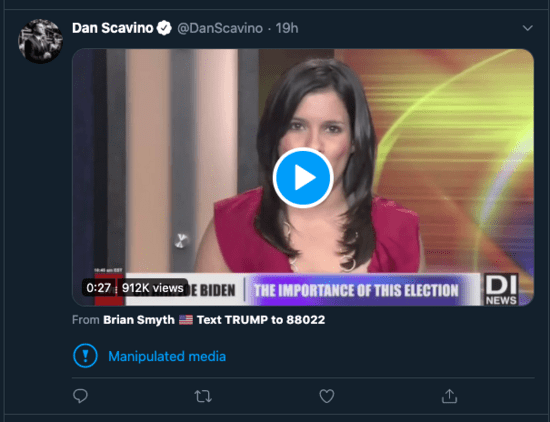 That's the Republican campaign in a nutshell:. Faked videos. Fake messages. Fake candidates. The only thing that isn't fake is the damage being done to democracy.

From Your Site Articles
Related Articles Around the Web
dan scavino jr.
Know First.
The stories you want. The opinions that matter. Delivered to your inbox every morning.

From Your Site Articles
Related Articles Around the Web

By Pardoning Flynn, Trump Underlines General’s Guilt — And His Own

Better Times Are Coming, For Those Who Hang On (And Mask Up)

By Pardoning Flynn, Trump Underlines General’s Guilt — And His Own

Better Times Are Coming, For Those Who Hang On (And Mask Up)

Deluded Trump Regales Farcical Hearing In Gettysburg, Insisting ‘We Won By A Lot'

Deluded Trump Regales Farcical Hearing In Gettysburg, Insisting ‘We Won By A Lot'