Fox News prime-time host Tucker Carlson and top right-wing media allies in his propaganda campaign claiming the January 6 insurrection was a false flag operation are now pushing a new set of conspiracy theories focused on the pipe bombs discovered that day outside both the Republican and Democratic national committee offices — which they want you to believe may have been planted by the FBI.

CNN and Politicoreported this past January that Vice President Kamala Harris, then the vice president-elect, had to be evacuated from the DNC headquarters when a pipe bomb was discovered outside. CNN later added more to the story, revealing that Harris had been within yards of the bomb when she initially arrived at the building.

About a month after this news broke, Carlson and his compatriots in the January 6 Truth movement began to push back with unfounded conspiracies. Carlson insinuated the reports about the pipe bombs were false on the February 9 edition of his Fox show: “Now, everyone has assumed those bombs were planted by a Trump supporter. The media have told us that. But who was this person?”

During a more than eight-minute rant, Carlson suggested virtually every detail of the pipe bomb news was suspicious, including the placement of the bombs, the construction of the devices, and the facts of their discovery. He even implied it was suspicious that the bomb suspect had still not been caught. Furthermore, according to Carlson, there must be some crucial information that Kamala Harris hasn’t been talking about — and “this is not a conspiracy theory.”

TUCKER CARLSON (HOST): What we can confirm is that Kamala Harris was not chased into danger on January 6 by insurrectionists. No, she was driven to danger by a government chauffeur. And then, critically, Kamala Harris hid that fact for more than a year. Why is that?

We have a right to know the answer to that question. It's not a conspiracy theory. It's an entirely legitimate question. Maybe someone could ask Kamala Harris.

Contrary to Carlson’s conspiracy theory, the FBI has publicly said that both bombs found at the DNC and RNC offices “were viable and could have been detonated, resulting in serious injury or death.” Carlson falsely claimed the bombs had been “designed to be found, not to explode” and misleadingly used quotes from police officials in 2021, who said that the bombs had potentially been meant to be a diversion to draw police away from the Capitol.

In Carlson’s telling, “the bomb couldn't have been the diversion that the Capitol Police Department said it was” unless the person planting it knew beforehand that Harris would be at the DNC. Carlson never mentioned, however, that a bomb was also found at the RNC office — a place Harris obviously would never have been in the first place — but such a fact would interfere with his own narrative. He also never acknowledged that the would-be bomber didn’t even need to have been targeting anyone specifically, and could simply have been targeting whichever people happened to be at either of those respective national headquarters that day.

A few days after Carlson delivered this monologue, his right-wing compatriot Julie Kelly published her own piece declaring the bombs were an FBI-perpetrated hoax. Her February 14 post to the right-wing website American Greatness declared “No one still trying to convince the public that two pipe bombs were planted near the Capitol in advance of January 6 can be believed.” Kelly’s post also dabbled in a number of other conspiracy theories that Carlson and his allies have pushed about January 6, including the purported involvement of Arizona man Ray Epps and claims that the storming of the Capitol involved a “still-unknown number of FBI informants.”

Kelly also appeared Wednesday, February 16 on One America News, where host Kara McKinney claimed “we have the makings of yet another hoax perpetrated by the FBI.” Kelly, in turn, falsely declared, “The FBI is not trustworthy. It is wholly an enforcement arm, a surveillance arm of the Democratic Party.”

Kelly had been working for months on this false-flag story. In November 2021, she wrote “So a fleet of bomb-squad trucks just happened to be on the east side of the Capitol complex, which happens to be the location of both the RNC and DNC headquarters, at exactly the same time a device is found?” (Emphasis in original.)

Keep in mind that such security services would have been in place near the Capitol, because there were certainly reasons for police to be on high alert for possible trouble on the date of January 6, a day that culminated in a mob of insurrectionists storming the Capitol to interrupt the presidential transition in an attempt to overthrow the government. Of course, the denial of this obvious fact is what the efforts by Carlson, Kelly, and key players on the far right is really all about. (And it’s also not any kind of magical coincidence that both the DNC and RNC normally have their offices right near the Capitol, which is the most obvious location for them in the first place.)

In the weeks in between the CNN and Politico reports, and then Carlson’s segment, Kelly posted a number of tweets about the bomb plotline, connecting it to what she falsely claims was a government-fomented breach of the Capitol.

Kelly also publicly applauded Carlson’s February 9 segment, and did some further promotion of the conspiracy theory in the days until her own post went live. For example, she seemingly branched out into yet another false-flag claim about an act of right-wing political violence from years ago — perhaps as a way of rhetorically planning ahead for any future arrest in the pipe bombs case: 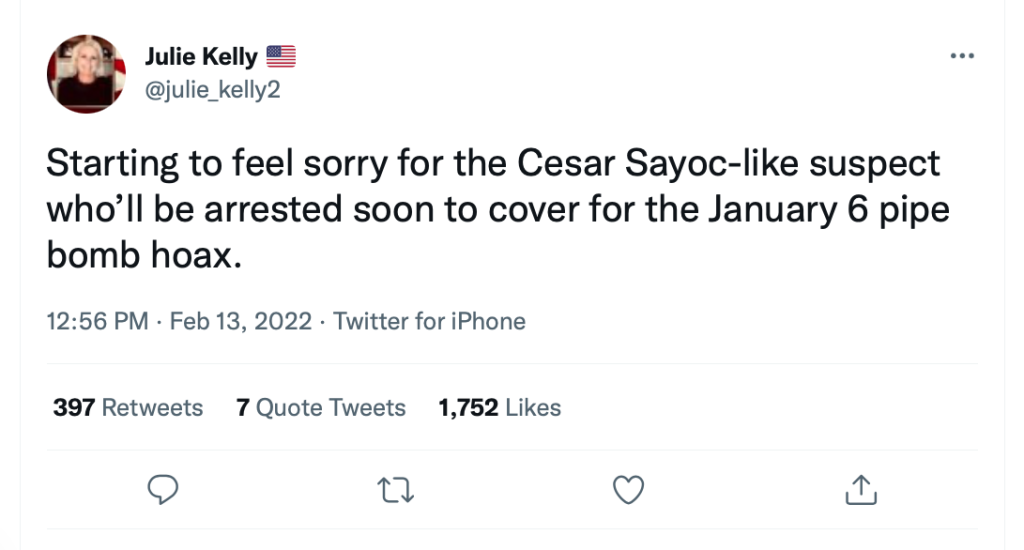 Cesar Sayoc is the so-called “MAGA Bomber,” who was arrested in October 2018 and pleaded guilty in March 2019 for sending mail bombs to a variety of liberal political figures including Joe Biden, Barack Obama, Hillary Clinton, George Soros, multiple members of Congress, actor Robert De Niro, and the CNN offices in both Atlanta and New York City. At his sentencing, Sayoc attributed his crimes in part to mental illness and decades of steroid abuse, also describing his political obsession with then-President Donald Trump as “this new found fun drug.” Sayoc was sentenced to 20 years in prison, and currently has a projected release date in November 2035.

At the time of Sayoc’s arrest, a number of right-wing media figures spread claims that the entire incident had been a false flag, on the grounds that Sayoc’s van — which was covered in pro-Trump stickers — purportedly looked too new and not sufficiently worn down for him to have been a real Trump supporter.

Right-wing commentators like Kelly and Carlson are now going back to this familiar well, insisting that right-wing political violence is never genuine and must be an elaborate hoax.