Fox News has built up a very close and flattering relationship with Florida Gov. Ron DeSantis, a report by the Tampa Bay Times has found, with the two sides coordinating coverage and story elements in an effort to build up the governor's profile as the new star of the Republican Party.

The network has elevated DeSantis especially on his opposition to COVID-19 lockdowns — or even any public health restrictions at all, with the governor now opposing local mandates for everything from masks in schools to vaccinations in hospitals. This summer, the state's hospitalizations have broken its previous records from 2020.

And while DeSantis has even banned private businesses from requiring their customers to be vaccinated, thus further hindering efforts to stop the spread of infections, he is now also promoting the therapeutic use of Regeneron, the monoclonal antibody treatment that former President Donald Trump received in 2020 — and which is also being promoted by Fox host Sean Hannity.

The Tampa Bay Times obtained via a records request 1,250 pages of emails between Fox News and DeSantis' office, spanning a four-month period beginning near the end of 2020. The paper's analysis found: "From the week of the 2020 election through February, the network asked DeSantis to appear on its airwaves 113 times, or nearly once a day." The paper also found that in the first six months of 2021, DeSantis had appeared on Fox eight times with Hannity, seven times with Laura Ingraham, and six times with Tucker Carlson.

In one example, a Fox producer told DeSantis' office that anchor Martha MacCallum had set out to "look forward and really spotlight the STARS of the GOP," and that "she named Gov. DeSantis as one."

Another producer bluntly said in an email: "We see him as the future of the party." Indeed, more than being just the "future" of the Republican Party, Fox itself played a key role in DeSantis' past ascent to the GOP nomination for governor back in 2018, when the then-congressman's frequent appearances on the network helped bring him to the attention of the network's most important viewer at the time, then-President Donald Trump.

The article opens with an incident from January when, "during a period marked by confusion and images of seniors in long lines desperate for a shot, Gov. Ron DeSantis' office devised a pitch to air a more flattering view. " Fox & Friends was given exclusive coverage of an event featuring DeSantis with senior citizens receiving COVID-19 vaccinations — and as the article notes, "No other media would be allowed in."

"I honestly think he could host the show with the chops we saw from him at the vaccine site," said a Fox producer, in an email to DeSantis' deputy director for communications.

It is worth adding that a similar event occurred later in May, beyond the scope of the newspaper's analysis, when DeSantis gave Fox & Friends exclusive coverage for his signing of a new voter suppression law. DeSantis signed the bill live on cable television while barring media outlets in Florida from being able to cover the event, a move that violated decades of First Amendment jurisprudence and the principles of free speech.

But perhaps the single most egregious example happened earlier this year, when DeSantis was set to appear on the January 28 edition of Fox News Primetime with rotating host and Fox Business anchor Maria Bartiromo. Hours before the show, DeSantis' office sent Fox a graph that compared the hospitalization rate in Florida to the "locked down states" of New York and California. 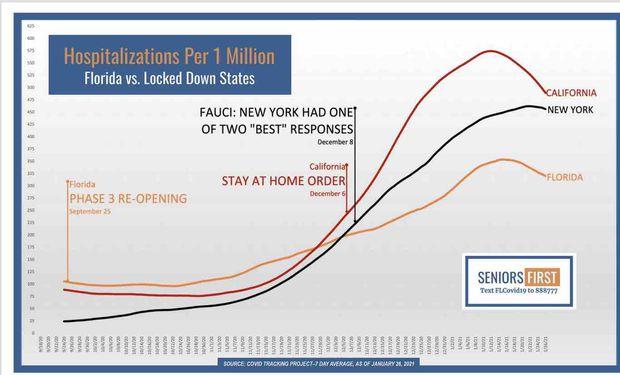 CitationFrom the office of Gov. Ron DeSantis (R-FL), via the Tampa Bay Times

When DeSantis appeared on the show, Fox aired the graph, simply redone in its own house style, while still carrying the same heading text of "Hospitalizations per 1 Million" and "Florida vs. Locked Down States," and even the same color scheme for labeling the names of each state. The newspaper notes that there was "no indication from the broadcast that the chart had originated in the governor's office." But actually watching the video makes the whole thing far worse, as anybody watching the show would have thought the graph had originated from Fox's production team, rather than DeSantis' staff.

During the broadcast, Bartiromo said that "We have graphics here that show how well Florida is doing."

Arguing falsely that lockdowns "haven't worked to stop the spread," DeSantis further added: "As you say, a place like California has been the most locked down. They've had higher cases, mortality, and hospitalizations per capita than us over the last three months" — referring to a graph that actually originated with his office, not something that Bartiromo had on her own.

All of this raises an important question: Where does Ron DeSantis' office end and the Fox News production team begin?

From Your Site Articles
Related Articles Around the Web
ron desantis

Ukraine army in the field

To support my coverage of the war in Ukraine, as well as my regular political screeds and occasional personal pieces, you can buy a subscription at luciantruscott.substack.com

Days after provoking backlash for circulating inert 40-millimeter grenades inside the U.S. Capitol, House Republicans are again facing fierce criticism for their latest stunt to own the libs — donning assault rifle lapel pins, despite there being over 58 mass shootings in 2023 alone so far.