On Twitter, President Donald Trump promoted OAN's coverage of the event as well as a live feed by Right Side Broadcasting. Other pro-Trump outlets including Newsmax, NTD News, and Steve Bannon ally Guo Wenguis's GTV covered it as well.

Fox News did not take the hearing live though, which led to a Trump complaint at 12:34 p.m. EST:

After Trump's complaint, Fox "straight news" anchor Harris Faulkner suddenly started giving the Arizona hearing more coverage in the 1 p.m. hour. Harris devoted a good portion of her opening segment with Fox reporter John Roberts to the matter, teased a live report from the state twice, and then finally did go live to Fox's Matt Finn in Arizona, where excerpts of the hearing were heard: 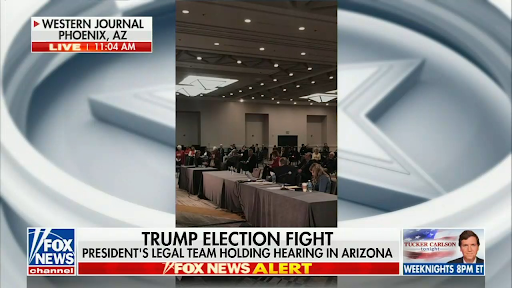 This comes as Fox News is fending off challenges from pro-Trump cable news outlet OAN, and has repeatedly used its "straight news" programming to launder talking points from its prime-time opinion hosts. There has even been a report that Fox was tracking guests on Newsmax to force them to pick a side between the warring right-wing media outlets.

Meanwhile, as this was all unfolding, Arizona certified its election results for President-elect Joe Biden.

From Your Site Articles
Related Articles Around the Web
rudy giuliani

Randy Rainbow is back with a fresh song parody, "Lock Him Up Yesterday."

Set to the tune of “Yesterday” by Paul McCartney and John Lennon, it pokes fun at Donald Trump for claiming the actual word “yesterday” is a “hard” word for him to pronounce clearly.

Former Vice President Mike Pence, asked if he would testify before the House Select Committee on the January 6 Attack, said if invited he would “consider” participating.

“If there’s an invitation to participate, I would consider it,” Pence said Wednesday morning at a political event in New Hampshire, a state presidential hopefuls visit early and often. “It would be unprecedented in history for a vice president to be summoned to testify on Capitol Hill, but as I’ve said, I don’t want to prejudge.”