Fox Canceled Lou Dobbs — And He Won’t Be Missed

Lou Dobbs Tonighthas been canceled at Fox Business. Host Dobbs, who had joined Fox after his birtherism led to him being forced out at CNN, became known at Fox for his over-the-top pro-Trump propaganda. Former President Donald Trump frequently tweeted about and made decisions based on Dobbs' program.

The news about his departure comes only a day after Dobbs and Fox News were named in a nearly 2.7 billion dollar lawsuit filed by voting technology company Smartmatic; there areindications that a similar suit from Dominion Voting Systems is forthcoming. The sudden schism is the culmination of an erratic, conspiratorial, and verybigoted career that became increasingly deranged throughout the Trump era. Here are some of the moments that defined what Dobbs' show had become during the Trump era.

Lou Dobbs defended insurrectionists at the U.S. Capitol: They "were walking between the rope lines" [MMFA, 1/6/21]

Lou Dobbs told Sidney Powell that "we will gladly put forward your evidence" that the 2020 election "was a cyber Pearl Harbor" [MMFA, 12/10/20]

Lou Dobbs suggested Republicans should just say "we're not going to accept the results of this election" [Twitter, 11/13/20]

The day after the 2020 election, Lou Dobbs demanded that Republicans "surround" Philadelphia and exert a "demanding presence" [MMFA, 11/4/21]

Lou Dobbs suggested that China is shipping fake IDs into the United States so that people can fraudulently vote [Twitter, 10/30/20]

Lou Dobbs warned of a possible "civil war in this country," suggesting that Sen. Mitt Romney (R-UT) could be responsible for it [Twitter, 9/21/20]

Lou Dobbs said that the country may need to re-do the presidential election if mail-in voting is allowed [MMFA, 8/24/20]

Dobbs claimed that the arrest of Steve Bannon aboard his patron's yacht by Postal Service agents was a "deep state" plot [MMFA, 8/20/20]

Lou Dobbs: "The president was right and frankly Fauci was wrong" about hydroxychloroquine [MMFA, 3/23/20] 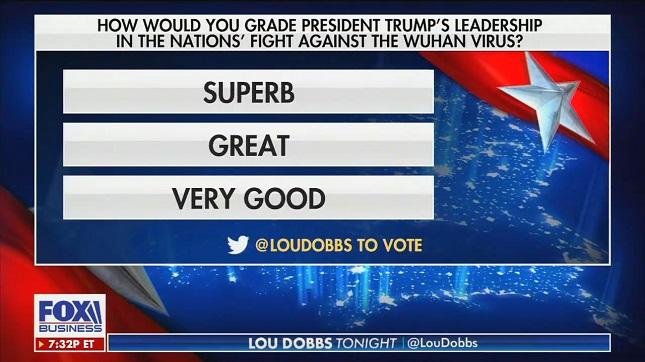 Lou Dobbs warned that there "will not be a quiet surrender" if election results aren't overturned [MMFA, 12/2/20]

Dobbs was upset after being told by "management" that he can't show a Trump campaign rally instead of doing his show [MMFA, 1/28/20]

Lou Dobbs: "It will be century after century of veneration for this president" [MMFA, 12/20/19]

Lou Dobbs: Democrats "are waging war on everything American, our Constitution, our president, the American people" [MMFA, 12/19/19]

Dobbs praised Trump for thanking Dobbs at a rally [Twitter, 11/5/19]

Lou Dobbs said that Democrats are trying to "destroy" Trump because of their "hatred of American values, and our heritage" [MMFA, 10/18/19]

Dobbs claimed that Trump makes great weekends "possible for us all." [Twitter, 9/13/19]

Lou Dobbs attacked journalists for not reporting on how much fun is being had inside the White House: "The joint is hopping" [MMFA, 9/12/19]

Lou Dobbs: George Soros' "tentacles reach out" in order to "work against sovereignty"[MMFA, 9/11/19]

Lou Dobbs said that special counsel Robert Mueller was part of a plot to help Democrats "steal" the 2018 midterms [MMFA, 5/29/19]

Lou Dobbs: The southern border is a "battlefield" and the military needs more guns there for when they get "a shot" [MMFA, 4/24/19]

Lou Dobbs calls for the jailing of Americans who investigated Russia's hacking of Democrats [MMFA, 4/18/19]

Lou Dobbs praises ICE employee for driving his car into a group of protesters [MMFA, 8/15/19]

Lou Dobbs asks if it's "time for the Trump administration to outright defy the activist" Supreme Court over census ruling [MMFA, 6/27/19]

Lou Dobbs warns that immigration could "consign tens of thousands, perhaps millions of Americans to their deaths" [MMFA, 3/29/19]

Lou Dobbs suggests with no evidence that sweeping Democratic victories in 2018 were due to migrants who voted illegally [MMFA, 11/5/18]

Lou Dobbs claimed that birthright citizenship led to an "explosion" of welfare in the 1960's[MMFA, 11/1/18]

Lou Dobbs: "It's a disgrace" that anyone argues police brutality is an issue [MMFA, 9/4/18]

Lou Dobbs: "U.S. Marshals should follow" Obama and bring him back when he criticizes Trump while abroad [MMFA, 12/1/17]

Lou Dobbs said that there is "a partisan shroud" around the family of slain DNC staffer Seth Rich [MMFA, 5/16/17]