Stone Posts Meme That Depicts Him Wielding Sword Against Judge

As Trump confidant Roger Stone serves home confinement while waiting to report to prison on July 14, he is using Instagram to attack Judge Amy Berman Jackson, the federal judge who oversees his case. Stone previously ran afoul of Jackson after he used his Instagram account to post a picture that showed Jackson next to apparent gun crosshairs.

The image Stone posted on Instagram on July 4 references the film 300, a fictionalized account of the 480 B.C. Battle of Thermopylae, which pitted a small number of Spartan warriors against Persian King Xerxes I. 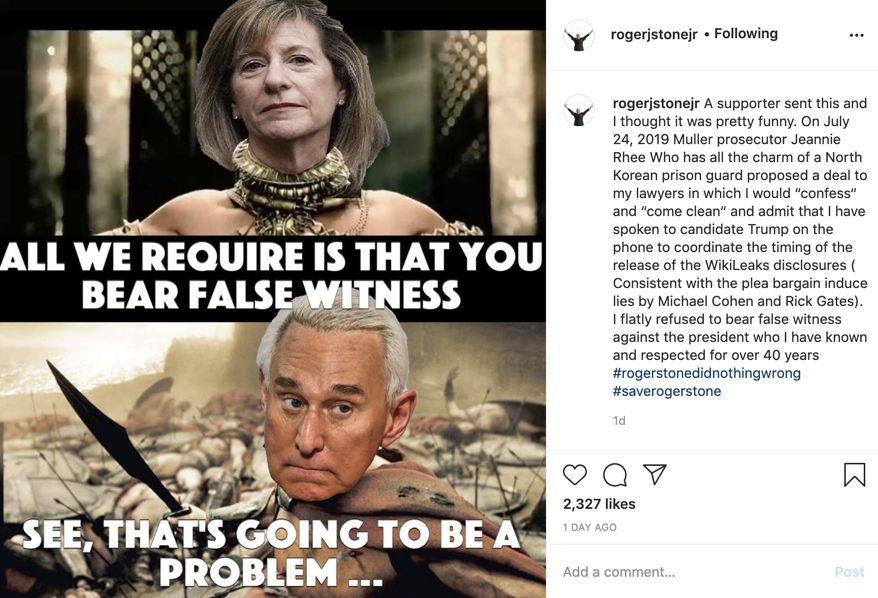 Jackson is depicted as Xerxes, the film's main antagonist, and Stone is shown as a sword-wielding Leonidas, the leader of the Spartans. (At the climax of the film, Leonidas attempts to kill Xerxes by throwing a spear at him, but succeeds only in wounding him, before he and the rest of his men are overwhelmed by the Persian army.) The image references a line often used by Stone while discussing his criminal proceedings -- his claim that he will not "bear false witness" against President Donald Trump.

Jackson oversaw Stone's criminal trial -- in which a jury ultimately convicted him of lying to Congress, witness tampering, and obstructing an official proceeding -- and sentenced him to 40 months in prison. Stone has been trying to use legal maneuvers to avoid going to prison, and most recently, Jackson granted Stone a reprieve of two weeks, extending a June 30 report date to July 14.

In February 2019, Stone posted an image to Instagram that showed Jackson next to apparent gun crosshairs. Stone was subject to a gag order at the time that prevented him from speaking about his case on the courthouse steps, but as a consequence of his post, Jackson expanded the gag order to prevent him from talking about his case in any venue. According to the U.S. Attorney's Office for the District of Columbia, Stone's crosshair image indicated "that the defendant poses a public safety risk" because of actions including "his attempt to incite violence upon a federal judge by posting on social media an image of the judge overlaid with crosshairs and recklessly accusing the judge of a political vendetta." Stone's gag order was lifted in April after Stone lost a motion for a new trial.

Stone has made other attacks on Jackson in recent weeks, accusing her of giving him a "purposeful death sentence" and claiming his sentence was motivated by political commentary he has made over the years and his friendship with Trump. Other Instagram posts Stone has made over the last several days have referred to Jackson as "sadistic."

As he waits to report to prison, Stone has been on a virtual media tour where he has repeatedly offered Trump an incentive to pardon him or commute his sentence, arguing that if the president does so, Stone can more effectively advocate for Trump's interests in the 2020 election.

From Your Site Articles
Related Articles Around the Web
roger stone