As the nation soared past 80,000 new COVID-19 cases on Friday for the very first time in a single day, Donald Trump was busily wrapping up a week of superspreading at a rally in a Florida retirement community known as the The Villages.

"We're rounding the corner beautifully," Trump told the mostly maskless crowd Friday evening, right around the time the country ticked past its previous record during the summer surge in the Sunbelt. As for his rival Joe Biden, Trump said, "All he talks about is COVID, COVID, COVID. Because they want to scare people." Well, there's some 225,000 fewer Americans to scare because they're already dead.

But for Trump, it's all superspreader all the time. In fact, a new analysis shows that rally by rally Trump has effectively been leaving a trail of death behind him. Earlier on Friday, Trump had hosted an Oval Office event to boast about the U.S. role in normalizing relations between Israel and Sudan. Sitting behind the Resolute Desk, Trump was flanked by 40-some maskless administration officials, packed in like sardines and emitting a distinctly hostage-y vibe. 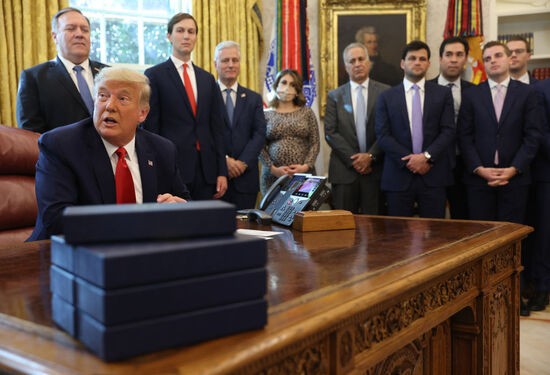 As pool reporters asked questions, Trump went out of his way to skewer Reuters' Jeff Mason for wearing "the largest mask I think I've ever seen," eliciting a few uncomfortable chuckles from the hostage crowd.

Ever since Trump contracted the virus and was oxygenated, airlifted to the hospital, pumped full of steroids and survived, his entire ethos has been that people shouldn't let COVID-19 "dominate" their lives. He likes to parade around his coterie of co-infectees such as Hope Hicks and Kayleigh McEnany as if to say, "see, my people are better than ever. No biggie."

As Trump put it at Thursday's debate, "I say we're learning to live with it. We have no choice."

Here's what 'learning to live with it' looks like in the Upper Midwestern and Mountain West states experiencing some of their worst spikes to date, according to The New York Times.

A hospital in Idaho is 99 percent full and warning that it may have to transfer coronavirus patients to hospitals in Seattle and Portland, Ore. Medical centers in Kansas City, Mo., turned away ambulances on a recent day because they had no room for more patients. And in West Allis, just outside Milwaukee, an emergency field hospital erected on the grounds of the Wisconsin State Fair admitted its first virus patient this week.
More than 41,000 people are currently hospitalized with the coronavirus in the United States, a 40 percent rise in the past month, and cooler weather that pushes more people indoors is threatening to expand the outbreak still more. At least 14 states saw more people hospitalized for the virus on a day in the past week than on any other day in the pandemic, according to the Covid Tracking Project. Seven more states are nearing their peaks.

We're not learning to live with it, Biden responded to Trump at the debate. "People are learning to die with it."

In fact, the first chance Biden was given to speak Thursday to the audience of some 63 million, with Trump's mic muted, he said, "220,000 Americans dead. If you hear nothing else I say tonight, hear this... anyone who is responsible for that many deaths should not remain as President of the United States of America."

On Friday in Delaware, Biden gave a pointed speech demonstrating Trump's complete lack of leadership on the pandemic. Biden told voters he would go town to town if he had to in order to piece together a nationwide mask mandate.

"I'll go to every governor and ask them to mandate mask wearing in their states," Biden said, "and if they refuse, I'll go to the mayors and county executives and get local masking requirements in place nationwide."

What a concept—a president actually getting in the trenches to set down a marker and save American lives.

As he has before, Biden rejected the notion that mask wearing was the political statement Trump has turned it into. "It's a scientific imperative," he said, "It's a point of patriotic pride so we can pull our country out of this godawful spiral we're in."

Biden reminded voters that, more than eight months into this crisis, Trump still doesn't have a plan.

That's exactly the hell we've all been living. Older Americans, parents, health care workers, first responders, governors, mayors, administrators, lawmakers—we've all been trapped in the hell of Trump's making. And because Senate Republicans have refused to lift so much as a finger to demand some kind of competency from Trump, the rest of us have been hobbled in our ability to rid ourselves of the scourge that is Trump.

But finally—finally—the moment is upon us when we can free ourselves of this incomparable idiot. And in fact, many Democrats have already voted to do so through early in-person voting or mail balloting—and many more so than Republican voters. In fact, Democrats have been running up a score that Republicans will be chasing on Election Day specifically because Trump spent months warning GOP voters away from early voting.

And so, just as the virus is surging in the some of the reddest areas of the country, Trump and Republicans have bet their entire fortunes on a one-day wave of record-shattering voting a little over a week from now.

No one upon no one is more deserving than Republican lawmakers of political ruin after their willful inaction on the worst public health crisis to hit the country in at least a century. May every last one of them feel the righteous wrath of being swept from power.

From Your Site Articles
Related Articles Around the Web
superspreaders