With research contributions by Kellie Levine

So-called "vaccination exemption" cards — which have no legal basis — are being promoted on social media platforms, including Twitter, which just updated its policy against COVID-19 vaccine misinformation. Despite this policy, tweets promoting online stores that sell these cards are still on the platform.

On March 1, Twitter announced that it would be "applying labels to tweets that may contain misleading information about COVID-19 vaccines." Earlier, the platform had implemented a policy against false claims about COVID-19 vaccines in December 2020, saying users may have to remove tweets with false suggestions that vaccines are used for population control, widely debunked claims of alleged adverse effects from the vaccine, and false claims that the vaccine is unnecessary.

Despite Twitter's policies against COVID-19 vaccine misinformation, there are tweets promoting supposed "vaccination exemption" cards, which allegedly allow holders to invoketheright of "informed consent." This term, which typically applies to clinical trials and medical procedures, is often misleadingly used when referring to the requirement for health care providers to give patients information about the benefits and risks associated with vaccinations. These "vaccination exemption" cards have no legal basis, as there is no federal requirement for "informed consent" related to vaccinations and there are currently no COVID-19 vaccine mandates.

In addition to "vaccination exemption" cards, fake "mask exemption" cards have been promoted on Twitter and other social media platforms since mask mandates were initially implemented in April 2020, even prompting the Department of Justice to issue a warning discrediting them. These cards arestillbeingpromoted on social media, oftenalongside "vaccination exemption" cards, even though someposts about mask exemptions have beenlabeledby Facebook as containing false information. In fact, Facebook earned at least$57,000 on over 130 ads that promoted the cards. Facebook removed the majority of these ads, but they had already earned millions of impressions.

Links to buy these "vaccination exemption" cards have been posted on multiple social media platforms, including Facebook, Instagram, YouTube, andTelegram. Notably, these cards have beenpromoted on Twitter, sometimes in conjunction with "mask exemption" cards. The cards are still being promoted, despite Twitter's latest policy against COVID-19 vaccine misinformation. 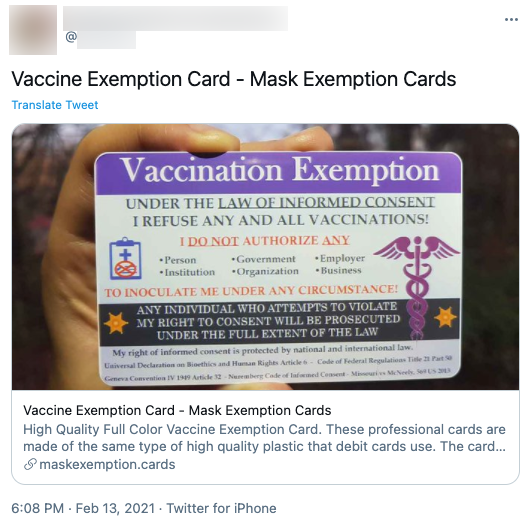 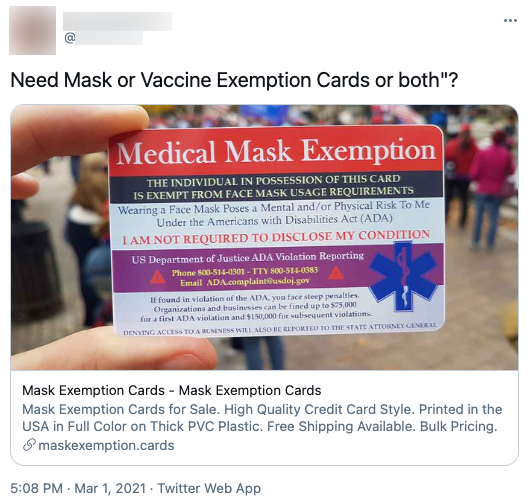 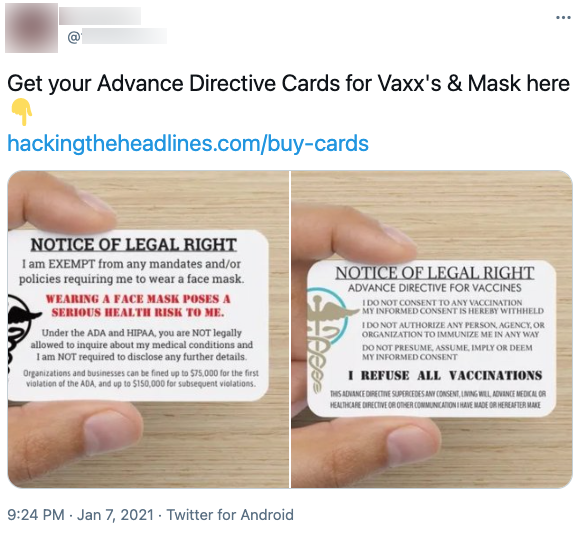 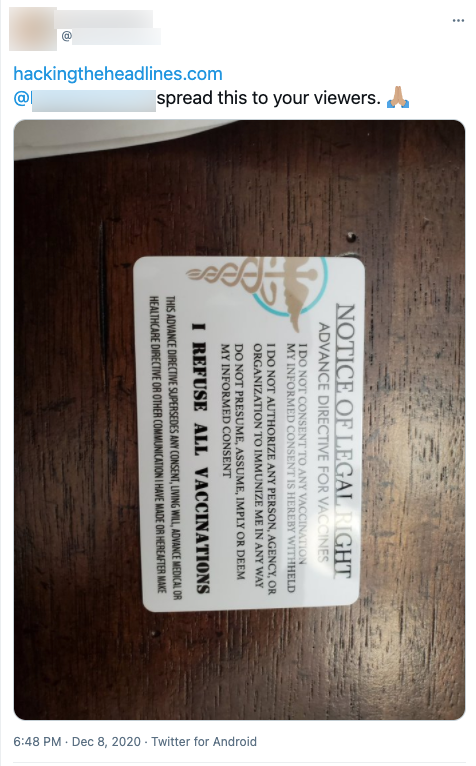 From Your Site Articles
Related Articles Around the Web
vaccination misinformation