Fox Uploads Two Versions Of Trump — With Or Without Election Lie

Fox News was publicly caught over the weekend attempting to edit out false claims that former President Donald Trump made in a phone interview — ironically enough, on a program called Unfiltered with Dan Bongino — from the version the network posted on YouTube and its own site. And now, faced with backlash from a problem of the network's own making by even having Trump on the air in the first place, Fox has set up a Choose Your Own Adventure pathway: A person can watch Trump with his election lie, or without it.

Fox is currently being sued for billions of dollars by two voting machine companies over the network's role in helping to spread lies about the 2020 election. In addition, YouTube has previously banned content that spreads baseless claims of voter fraud to deny the 2020 election's legitimacy, in the wake of the January 6 attack on the Capitol by Trump supporters. (YouTube's enforcement has been spotty, though.)

As Mediaite documented on Sunday, Fox News clearly edited out Trump's claims of a "fake election" from the videos it posted online — otherwise posting the entire interview, but cutting out approximately five seconds.

Here was Trump during the live broadcast on Saturday, threatening that the country would not "stand for it much longer" against the "fake election":

FORMER PRESIDENT DONALD TRUMP: It's a disgrace what's happening, and I don't think the country's going to stand for it much longer, they are disgusted. You have a fake election, you have an election with voter abuse and voter fraud like nobody's ever seen before, and based on that, and based on what happened, they are destroying our country, whether it's at the border, whether it's on crime, I could say in plenty of instances, including military.

And here is the edited version that Fox posted to YouTube, as well as on its own website, in which Trump's words became a more generalized complaint about conservative grievances:

FORMER PRESIDENT DONALD TRUMP: It's a disgrace what's happening, and I don't think the country's going to stand for it much longer, they are disgusted. They are destroying our country, whether it's at the border, whether it's on crime, I could say in plenty of instances, including military.

Trump spokesperson Liz Harrington, who has vocally promoted the defeated president's election lies, then took to Twitter to attack both Fox News as a company for having put Trump's "honest statement" down an Orwellian "Memory Hole" — and host Dan Bongino personally, telling him in a since-deleted tweet (preserved in screen grabs by Mediaite) that his show ought to be called "FILTERED" instead.

Bongino then responded to Harrington, promising that he was "looking into it," and complaining that he "wasn't even contacted BEFORE" Harrington attacked him. "I've been a staunch ally to President Trump from the beginning, even when others sold him out," the Fox host wrote.

Harrington followed up on Twitter Sunday night — interestingly enough, by taking down and then posting a new version of her "Memory Hole" tweet — shifting the blame entirely onto the network. "This had nothing to do with @danbongino," she wrote, further adding: "It was @FoxNews who cut out President Trump's statement about the Fake Election, just like they have cut out coverage of election fraud ever since." 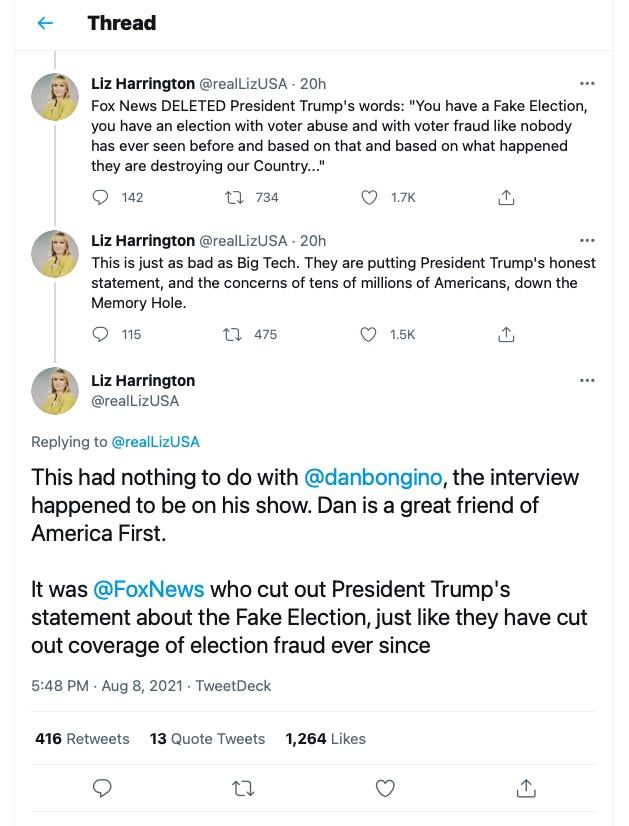 Whether in response to the general right-wing outrage, or even a specific inquiry from Bongino, Fox has now given in — as it now provides versions of the interview both with and without Trump's election lie.

Following the video originally posted on Sunday, with a length of 16 minutes and 12 seconds, Fox has now posted a new version on Monday at 16 minutes and 17 seconds, restoring Trump's election lies roughly nine minutes into the interview.

From Your Site Articles
Related Articles Around the Web
fox news