I can't stop watching the MyPillow Guy, Mike Lindell, and his "Frank-a-thon" to launch his stupid new Arby's dumpster of a website. The guy has been jabbering for the better part of two days. This morning, I tuned in to see him interviewing someone, but I never got the dude's name because Lindell wouldn't let him get a word in. Lindell won't stop talking. It's a case of logorrhea the likes of which I've never seen before. I'll give him the benefit of the doubt and assume he's on 100 CCs of Jesus and not overstuffed Hefty bags full of cocaine cut with meth. But, damn, he's a dynamo of disinformation.

While I was watching, Lindell claimed he'd gotten confirmation from Jimmy Kimmel Live! that he will be a guest on the show. Kimmel, who appears to be even more obsessed with Albino Grimace than I am, has previously joked that he'd interview Lindell under two conditions:

"Number one, he has to actually come into our studio—I need to see him in person. I want to smell the knackwurst in his mustache. And number two, I would like to conduct our interview in a bed, surrounded by pillows. Just me and Mike snuggled up side by side in a California king surrounded by sacks of goose feathers."

Judging by Mike's reaction, he almost certainly thinks he's about to break this whole election fraud thing wide open on late-night TV while nuzzling a guy who can't stop making fun of him. Speaking of Lindell's gullibility, the guy who called in to Lindell's show on Monday pretending to be Donald Trump spoke with the Daily Beast, and revealed his diabolical methods.

Actually, he was responsible for multiple prank calls to Lindell's show.

The prankster, Ron Blackman, is apparently an old hand at this. He has a podcast called The Macron Show, and he typically uses "social engineering and caller-ID spoofing" in order to soften up a target and make them more susceptible to skullduggery.

According to Blackman, Frank Speech and Lindell were easy marks.

Blackman prepared for pranking the MyPillow boss for weeks, he said, and the initial plan was to register a bunch of new user names on Frank Speech and use them to mock the pro-Trump pillow salesman during his 48-hour kickoff event, titled "Frank-a-thon." Despite the hotly anticipated launch, the site struggled right off the bat on Monday, with many users unable to log on and set up their profiles.
Not only was Lindell easy to dupe, Blackman said, but the prank calls were made especially easier thanks to the MyPillow CEO's co-host Brannon Howse, a fellow election conspiracist and right-wing talker.
"That dude is dumber than a bag of rocks," Blackman said of Howse. "He's the reason I got to Lindell so easily yesterday."

Blackman says he got Howse's personal cellphone number off his public Facebook page, which made it kind of easy to call in to the show. Blackman first got on-air by pretending to be a Wall Street Journal reporter. "I just told her [the assistant] to give me Mike's number, and she did it without thinking," Blackman told the Daily Beast. "And it proves 100% that he didn't even have a plan for his big live stream. He was totally winging it. Sitting there with his iPhone on his desk praying that someone good would call in to support him."

As for the Trump call, Blackman says he spoofed a number from Mar-a-Lago. "I knew for certain that I'd have about one second to say what I wanted before Lindell panicked and hung up. I used a soundboard of Donald Trump saying 'Hello everyone' to reel him in and then I yelled out my website name, so that at least everyone hearing it would know where to find me, so that we got to hijack all his effort and time and use it to promote a prank call show instead of his website."

Kimmel also had some (more) fun at Lindell and Frank's expense Tuesday night.

Meanwhile—and pardon me if this is burying the lede—nothing on Frankspeech.com appears to work at the time of this writing, other than the live feed from the baby monitor we're all using to make sure Lindell doesn't choke to death on a Lego. 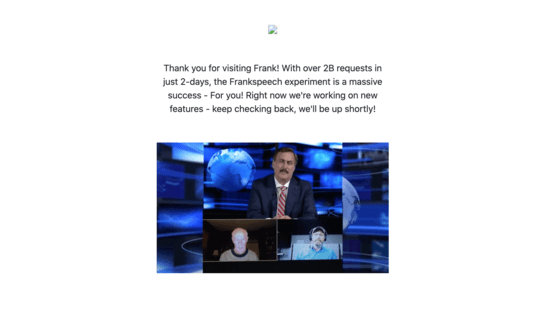 Considering that Lindell had planned to launch his site on Monday to everyone and to VIPs last Thursday, that can only be seen as unfortunate. (For Lindell, that is. For democracy and comedy, it's a boon.)

Gee, it's almost as if this dude has no relevant experience whatsoever in television production or social media platform launches.

And for a while earlier Wednesday, the site was completely offline.

Because that's what you want to show people when you launch a new product that you've been hyping for weeks: a page claiming the site is undergoing "scheduled maintenance."

There's always FrankSocialMedia.com, courtesy of the folks over at The Good Liars.

Is it too much of a stretch to say I'm now more addicted to Mike Lindell than Mike Lindell was previously addicted to crack? Maybe not, but I should probably limit my exposure. I'm beginning to see that majestic gleaming mustache dancing in the wind whenever I close my eyes.

"This guy is a natural. Sometimes I laugh so hard I cry." — Bette Midler on author Aldous J. Pennyfarthing via Twitter. Need a thorough Trump cleanse? Thanks to Goodbye, Asshat: 101 Farewell Letters to Donald Trump, Dear F*cking Lunatic, Dear Pr*sident A**clown and Dear F*cking Moron, you can purge the Trump years from your soul sans the existential dread. Only laughs from here on out. Click those links, yo!

From Your Site Articles
Related Articles Around the Web
mike lindell