As Arizona conducts an audit of ballots in Maricopa County rooted in baseless conspiracy theories about the outcome of the 2020 presidential election, it appears the evidence underpinning that effort and much of the work to generate support for it has come from two QAnon followers, Liz Harris and Bobby Piton.

Both Harris and Piton have frequently bragged about working with Arizona senators and audit officials -- in one case, even livestreaming a supposed meeting with Rep. Andy Biggs (R-AZ) to discuss their findings -- but their support of the election audit is grounded in widely debunked claims of voter fraud, many of which stem from the same "Stop the Steal" allegations that the election was stolen from former President Donald Trump.

Harris is head of a "non-partisan" "grassroots canvass effort" to prove that rampant voter fraud exists in the state's most populous county (it doesn't). The group claims, using data tabulated by Piton, to have uncovered mass voter fraud during the 2020 election.

Harris ran for the Arizona House of Representatives's District 17 seat in 2020 but lost the general election. Much of her time is now dedicated to voter fraud canvassing efforts, while she commonly livestreams multiple videos per day related to the Arizona audit on YouTube and Facebook.

Piton is a managing partner at a financial planning and investment advisory firm in Illinois, whose website claims he "has read well in excess of a million pages over his career and has extensively studied physics, quantum mechanics, mathematics, economics, trading, portfolio construction, model development, asset valuation, and alpha generation to develop and refine his methodology."

It seems that Harris and Piton have a relationship with Doug Logan, the CEO of Cyber Ninjas, the company conducting the audit. Logan recently came under fire for peddling "Stop the Steal" and other election fraud conspiracy theories on his personal Twitter account before it was deleted.

On April 11, Piton posted on the far-right platform Gab promising to provide his supposed Maricopa election fraud findings "to the person who won the bid to perform the audit," which would be Logan and Cyber Ninjas. Piton later confirmed to The Daily Beast that Logan "asked him for his assistance" in the election audit, where he was working "in an unofficial capacity." Piton also prayed a rosary on YouTube for Harris, Logan, and all Arizona "patriots."

Harris claimed to have met Logan "multiple times," and there is additional evidence to suggest that Harris and Logan have been in communication about the audit. According to a May 12 newsletter from Arizona Capitol Reports, Logan boosted Harris' campaign with the hashtag "#PhantomSleeperVoters," a reference to conspiracy theories about fraudulent ballots cast by nonexistent voters, before the deactivation of his Twitter account.

On February 28, Harris uploaded photos of herself with former Overstock CEO Patrick Byrne and MyPillow CEO Mike Lindell, two of the right-wing, pro-Trump millionaires funding the Arizona election audit, as well as Sidney Powell, the former Trump campaign attorney and conspiracy theorist who attempted to overturn the 2020 presidential election. In the comments under the photos, Harris wrote, "Arizona hold on to your hats… The storm has just begun!" ("The storm" is a key phrase in the QAnon conspiracy theory.) Harris noted that this meeting occurred in Arizona but did not provide other specifics. 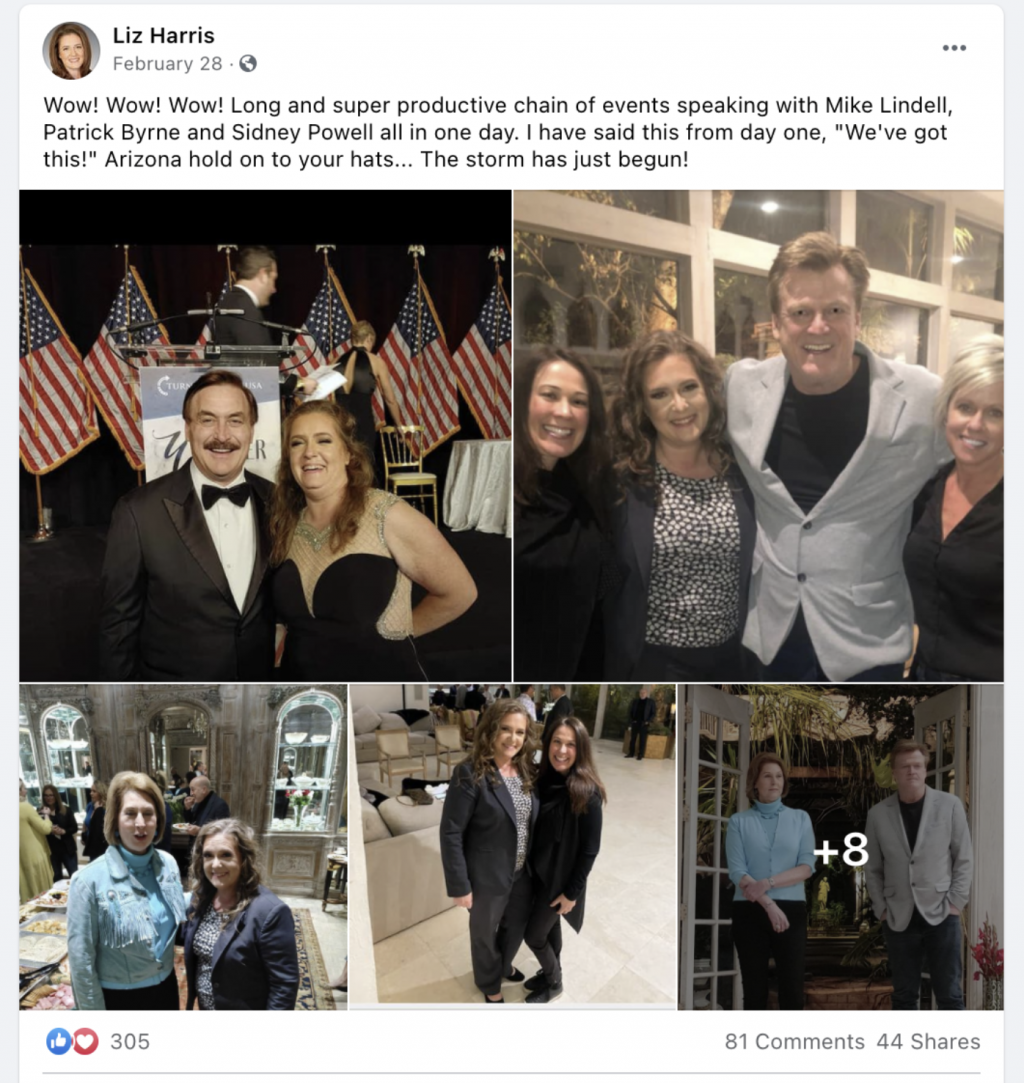 Harris has bragged in an April 25 livestream about sharing her canvassing data with Arizona state Senate President Karen Fann, who has been supportive of the audit. She also said senators were lauding her canvassing efforts and relayed that audit officials were supposedly going to incorporate her work "into this deep-dive forensic audit."

At one point, Piton livestreamed what appears to be a private Zoom meeting about the election audit between Harris, Rep. Andy Biggs, members of the Arizona Senate, and himself. This means that state Senate members and a sitting U.S. congressman were seemingly consulting with Harris and Piton about the audit and baseless allegations of election fraud. In the same livestream, Piton told his viewers that he had been asked to help with the election audit.

"One of the individuals that may be winning this bid to do the work has contacted me a few weeks back," Piton said. "I did tell Liz I thought they would be contacting me, or somebody would. And they asked me if I would look at the data and I said that I would definitely be helping in one way, shape, or form."

Given Piton's other claims about contact with audit officials, this is most likely another reference to Logan.

On January 19, Piton posted what appears to be a birthday card from Trump and "two Patriots" working in the White House, at least one of whom appears to be from the National Security Council. This is particularly significant given Piton's unofficial role in the Arizona election audit; the post also claims that Piton has been "communicating some of my findings with" those administration officials. 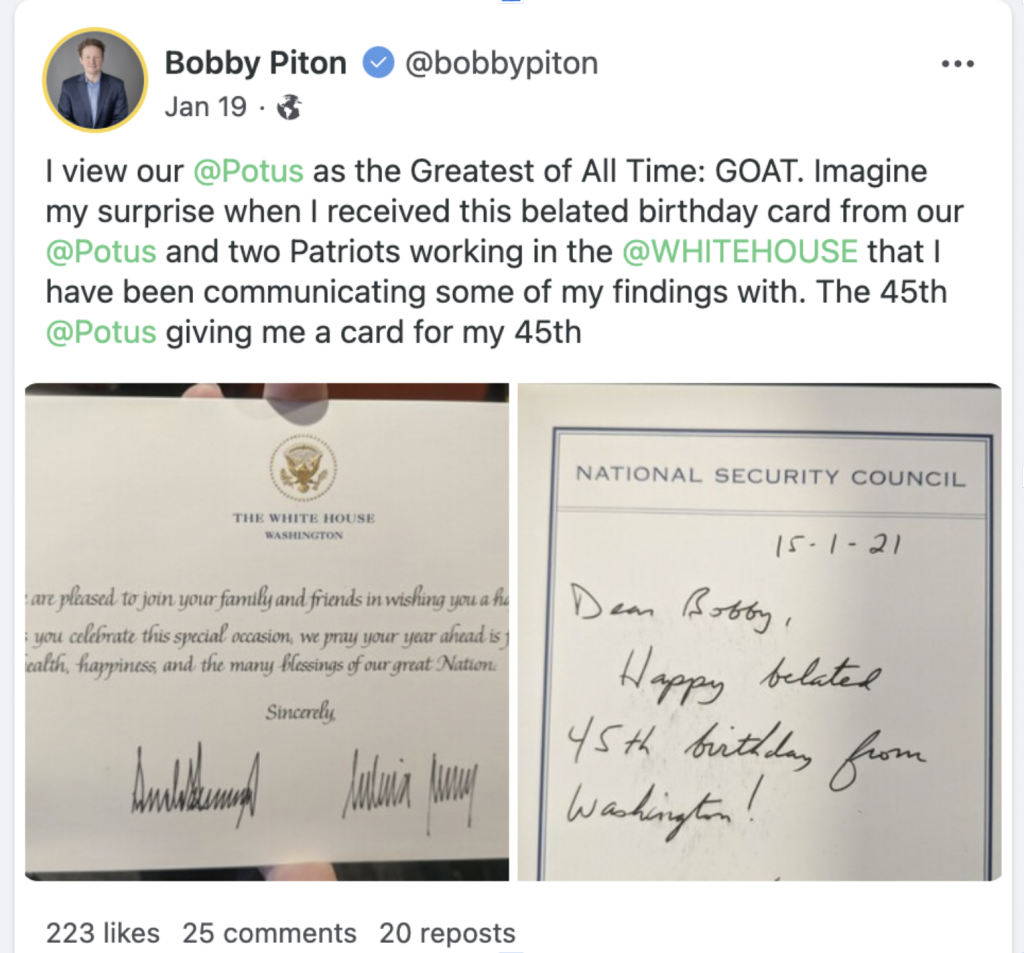 In an April 2 Facebook post, Piton bragged about signing affidavits for "both Lin Wood and Sidney Powell regarding PA data back in mid December."

Piton and Harris worked together to attempt to prove potential voter fraud abnormalities. According to Piton, he provided Harris with "a sample size of over 95,000 voter registrations that he forecast would have problems of the approximately 4,300,000 registered voters who are on the voter rolls"; Harris then "randomly selected names on those lists and had volunteers go to work in determining how many of these registered voters had issues." This formed the basis for their election fraud claims.

Harris' group started the "Crime of the Century" project, a website dedicated to exposing supposed voter fraud in Arizona. It includes an "Election Integrity Arizona" page that contains Harris' "initial findings and analysis of the 2020 General Election in Maricopa and Pima counties conducted by a citizens' non-partisan grassroots project." The Arizona Republic reported that Harris' initially claimed her "group was helping with the Senate's audit, but she couldn't say on what part because of a nondisclosure agreement. Harris later said she doesn't know what her involvement may or may not be."

The Arizona audit isn't the first brush Harris and Piton have had with promoting misinformation about election integrity. Harris also testified at Rudy Giuliani's Arizona election fraud "hearing" in November, with Piton appearing as an expert witness to claim "that his opinion, from reviewing Arizona voter data, was that between 120,000 and 306,000 ballots were cast by 'fake people.'"

Both Harris and Piton have posted content and slogans affiliated with the QAnon conspiracy theory. Followers of QAnon led the January 6 insurrection at the U.S. Capitol and believe that Trump will conduct mass arrests and secret military tribunals to prosecute "deep state" elites.

Harris' social media presence suggests that she subscribes to the QAnon conspiracy theory. Her Facebook account contains QAnonvideos, a "WWG1WGA" shirt (an abbreviation of the QAnon slogan "Where we go one, we go all"), and QAnon-affiliatedposts.

As for Piton, when The Daily Beast first reported on his unofficial involvement in the Arizona audit in late April, he said that "he didn't know much about QAnon." But his social media tells a different story. Posts explicitly supporting the QAnon conspiracy theory, and even a Q "drop" -- the term for messages from the anonymous figure at the center of the conspiracy theory -- are scattered throughout his public Facebook page. 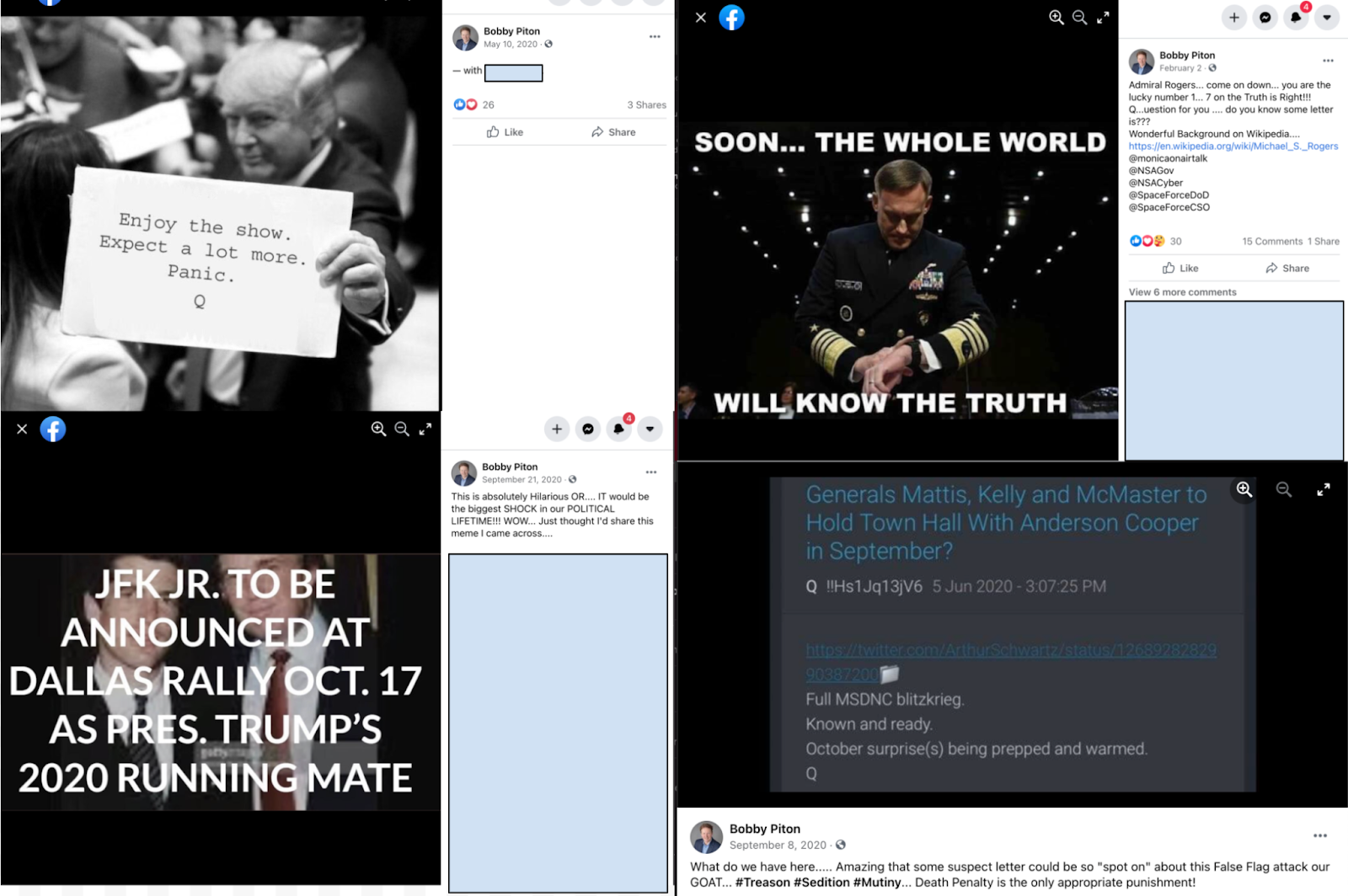 For example, on August 2020, Piton wrote a post in support of the "#SaveTheChildren" QAnon movement, calling the Democratic Party the "DemoNcrat Party." "This party is PURE EVIL," wrote Piton. The image he shared with this post also contained the QAnon slogan "WWG1WGA." In a post following the January 6 insurrection, Piton claimed to have never "been part of any 'Q movement'" and downplayed his support as merely liking "some of their phrases."

Less than a month later, Piton posted a photo of former National Security Agency Director Admiral Michael S. Rogers along with references to QAnon. "Admiral Rogers… come on down… you are the lucky number 1… 7 on the Truth is Right!!!" wrote Piton. (Q is the 17th letter in the alphabet and is popularly used to refer to "Q.")

"Q...uestion for you," he continued, once again referencing Q.

In November 2019, Piton shared a QAnon primer video on Facebook, writing: "Keep an open mind… even if all of this isn't 100% accurate, it is something worth thinking about!" 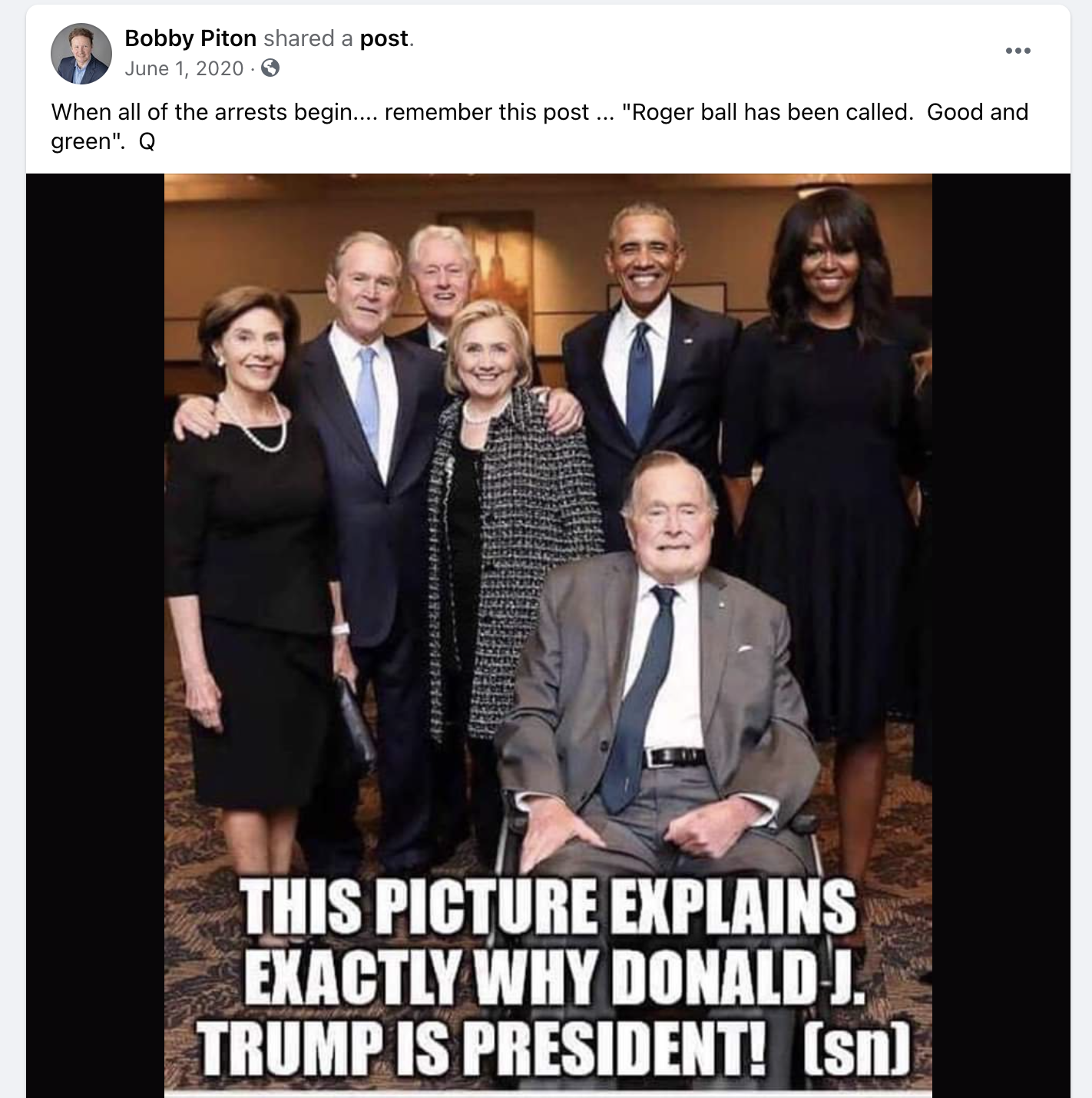 On April 25, Piton and Harris were both interviewed on the QAnon outlet Patriots' Soapbox. During the livestream, Josh Barnett, a QAnon House candidate who lost a race to represent Arizona's 7th Congressional District in 2020 and is running again for the state's 6th district in 2022, bragged that Arizona senators "saw Liz's numbers" and "saw Bobby's data" and "that's when things started changing" and they began backing the audit.

Harris and Piton's involvement in the Arizona election audit is more than concerning -- if their claims of working with audit officials and Arizona senators are true, it means that an attempt to overturn Arizona's election results has been quietly influenced by two QAnon followers working from within.

From Your Site Articles
Related Articles Around the Web
arizona audit