A retired firefighter who threw a fire extinguisher at police officers during the January 6 Capitol insurrection was put under pretrial house arrest on Tuesday. Robert Sanford had surrendered himself to federal authorities on multiple charges nearly a week after the insurrection. HuffPo's Ryan J. Reilly reported that according to Sanford's attorney, the defendant traveled to Washington, D.C., on a bus organized by Turning Point Action, founded by Trump loyalist Charlie Kirk.

Following the insurrection, Kirk deleted a January 4 tweet saying his organization was sending 80 buses of Trump supporters to the "Stop the Steal" rally on January 6. A Turning Point Action spokesperson claimed that the organization had sent only seven buses to the capital and that the student protesters were not involved in the day's violence.

During his January 4 podcast, Kirk stated, "Turning Point Action is being financially supportive of that rally. We are sending buses." 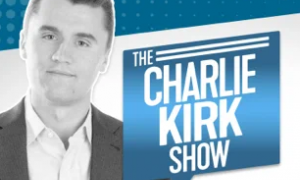 He also said during that episode: "We are at Turning Point Action helping with the big event in Washington."

In the weeks leading up to the insurrection, Kirk spread misinformation and dangerous rhetoric involving the attempted election coup. He called on former Vice President Mike Pence to unilaterally discard state electors. He also criticized Sen. Mitch McConnell (R-KY) for congratulating President Joe Biden on his election victory, saying, "You typically don't use the term 'congratulations' when someone just stole a bank."

After the attack on the Capitol, Kirk called the violence "bad judgment" and said it was "not wise," continuing, "However, 'not wise' does not mean you're an insurrectionist."