Florida Republican Rep. Matt Gaetz is under investigation for potentially violating sex trafficking laws, according to a new report Tuesday from the New York Times.

Officials are reportedly investigating his relationship with a 17-year-old girl and whether he had sex with her and paid for her to take take trips with him. It is a federal crime to use money to get an underage person to cross state lines for sexual purposes.

"It was not clear how Mr. Gaetz met the girl, believed to be 17 at the time of encounters about two years ago that investigators are scrutinizing, according to two of the people," the report said. "The investigation was opened in the final months of the Trump administration under Attorney General William P. Barr, the two people said. Given Mr. Gaetz's national profile, senior Justice Department officials in Washington — including some appointed by Mr. Trump — were notified of the investigation, the people said."

Earlier on Tuesday, Axios had reported that Gaetz has considered stepping down from Congress early to join the right-wing outlet Newsmax. It's not clear if such considerations are related to the investigation reported by the Times.

The Times reported that the investigation of Gaetz grew out from a "broader investigation into a political ally of his, a local official in Florida named Joel Greenberg, who was indicted last summer on an array of charges, including sex trafficking of a child and financially supporting people in exchange for sex, at least one of whom was an underage girl."

Greenberg shared a picture on Twitter with Gaetz at the White House in June 2019, as the Times pointed out. He has pleaded not guilty to the charges against him. 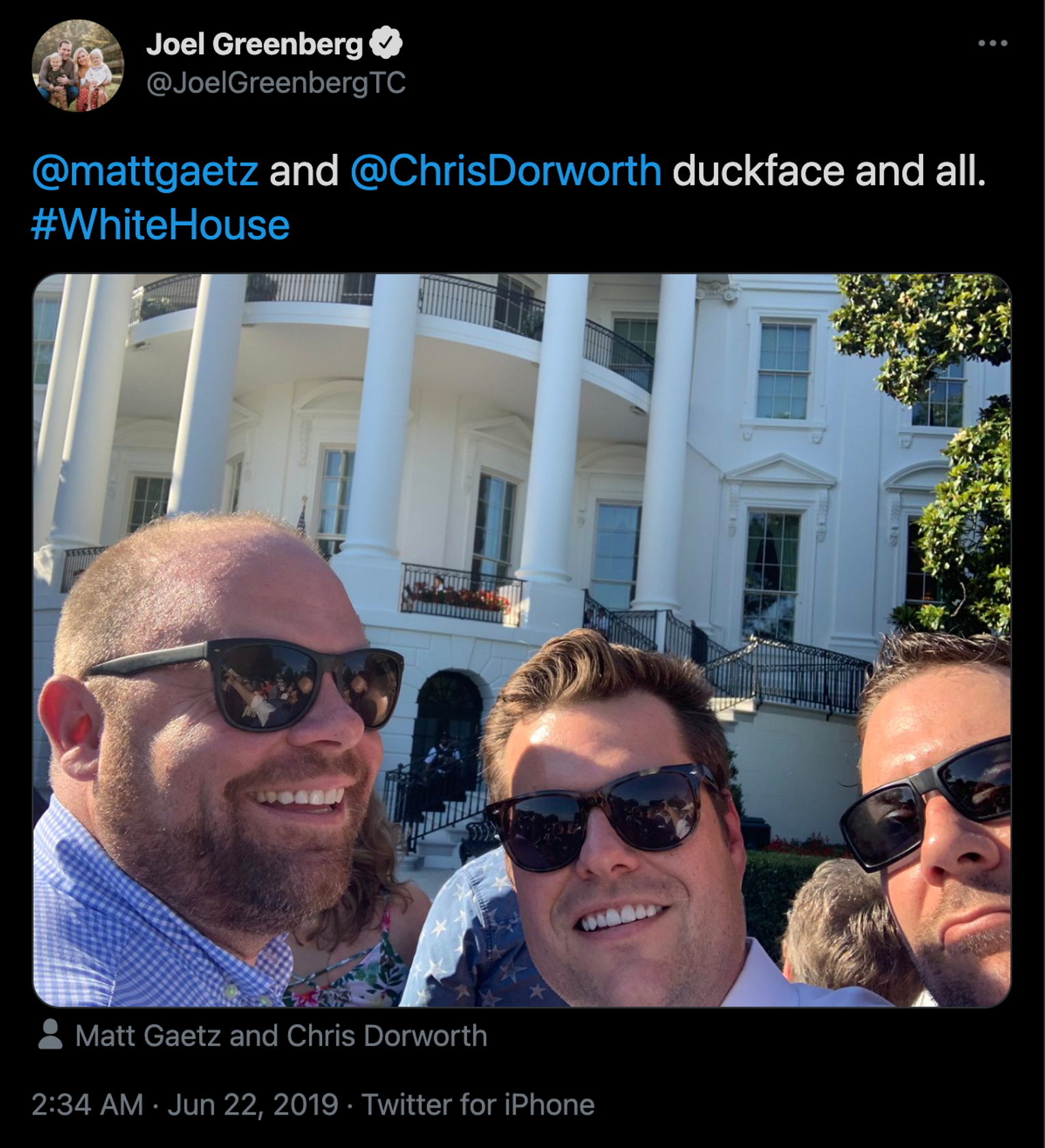 Gaetz gave a bizarre and puzzling response to the Times when asked about the case, seeming to confirm at least some parts of the report:

Mr. Gaetz said in an interview that his lawyers had been in touch with the Justice Department and that they were told he was the subject, not the target, of an investigation. "I only know that it has to do with women," Mr. Gaetz said. "I have a suspicion that someone is trying to recategorize my generosity to ex-girlfriends as something more untoward."

After this piece and the Times story were initially published, Gaetz gave more extended comments to Axios.

"I have definitely, in my single days, provided for women I've dated. You know, I've paid for flights, for hotel rooms. I've been, you know, generous as a partner. I think someone is trying to make that look criminal when it is not," he said. He added that "absolutely" none of the women were underage."

"The allegations of sexual misconduct against me are false," he told reporter Jonathan Swan. "They are rooted in an extortion effort against my family for $25 million … in exchange for making this case go away."

Ever since the Republican party was hijacked by a clownish, failed businessman and reality tv host turned fascist dictator, many on the left have pined for the simpler days of George W. Bush. Putting aside his obvious failure of a lifetime in launching a brutal, unnecessary, and costly war in Iraq, the not-so-bright former president would probably be considered a leftist by today's deranged Republican party of rabble-rousing misfits. Stephen Colbert, like many of us comedians at the time, took great pleasure in jostling George Bush over his failures in Iraq.

Although he has since dropped his more arcane Colbert Report far-right character after taking over hosting duties at the Late Show, Colbert is as political as ever. Having been said, Colbert mocked George W Bush, who gave a speech in Dallas on Wednesday for an event called “Elections – A More Perfect Union”, which focused on how elections work.

A group of lawyers has submitted a 15-page ethics complaint to the State Bar of Texas demanding an investigation of Senator Ted Cruz (R-TX) for his “leading role” in the far-reaching Republican effort to keep former President Trump in power despite his reelection loss.

The complaint — filed by the 65 Project, an organization of lawyers seeking to hold attorneys accountable for lending a hand in pro-Trump efforts to overturn the results of the 2020 elections — called for an examination of Cruz’s conduct in the weeks before Election Day in 2020 and on January 6, 2021, the day of the Capitol insurrection.

'Shoot Yourself In The Legs': Russian Troops Mutiny In Ukraine