In a newly uncovered exchange, Marjorie Taylor Greene in 2018 agreed with a Facebook commenter who claimed that 9/11 "was done by our own gov[ernment]" and that "none of the school shootings were real or done by the ones who were supposedly arrested for them," including the 2012 shooting at Sandy Hook Elementary School in Newtown, Connecticut, and the 2018 shooting at Marjory Stoneman Douglas High School in Parkland, Florida.

Media Matters reported earlier this week that Greene agreed in 2018 that the Parkland shooting was actually a false flag planned event. She also wrote in a separate post that she had supposedly been "told that Nancy Pelosi tells Hillary Clinton several times a month that 'we need another school shooting' in order to persuade the public to want strict gun control."

Greene's remarks have led to condemnation, including from Parkland survivors and Fred Guttenberg, who is the father of shooting victim Jaime Guttenberg. (The Republican House leadership does not appear to have commented on her remarks.)

Greene, who was previously a right-wing commentator, won election in 2020 as a Republican in Georgia's 14th Congressional District. She has frequently pushed conspiracy theories and toxic rhetoric. Greene has supported the QAnon conspiracy theory and attempted to overturn the 2020 presidential election.

On June 2, 2018, Greene posted a link to a piece on the conspiracy theory website The Gateway Pundit about former Secretary of State Hillary Clinton's email server and wrote, in part, that "the people in power stop the truth and control and stall investigations, then provide cover for the real enemies of our nation. Why? Because they are ALL in it together, the swamp, is one gigantic cesspool of both Democrats and Republicans, and many in all of the intel agencies."

In the comments section, someone responded: "True they are fused by the bonds of mutual criminal treason." Someone later replied by claiming that "911 was done by our own Gov"; that the Parkland school shooting was actually "a deep state warning to the pocket puppets in the house and senate" and "fake" ; that "none of the School shootings were real or done by the ones who were supposedly arrested for them, They are just the image of the shooting"; and that Sandy Hook was a "STAGGED [sic] SHOOTING," among other conspiracy theories.

The second commenter also said there are messages in the Georgia Guidestones and claimed that certain people "are all about killing off 6.8 Billion of the 7.3 billion people on Earth." The Georgia Guidestones is a granite monument in Elberton, Georgia, that has attracted the attention of conspiracy theorists who believe it is a tribute to the "New World Order," a group of elites who supposedly control the world.

Greene liked the post pushing those various conspiracy theories. She also wrote in the thread: "That is all true. By the way, I've seen the Georgia guide stones." 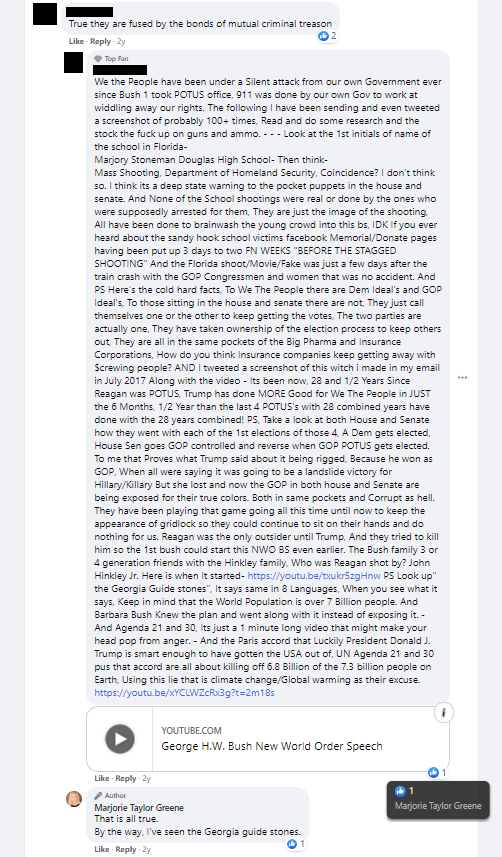 Last year, Media Matters reported that she falsely claimed in a 2018 video that there's no evidence a plane crashed into the Pentagon on 9/11. After receiving heavy criticism, Greene claimed that she was supposedly "being attacked for my opposition to open borders and globalist neocon nation building wars" and said: "Some people claimed a missile hit the Pentagon. I now know that is not correct. The problem is our government lies to us so much to protect the Deep State, it's hard sometimes to know what is real and what is not."

Republicans have embraced Greene. The National Republican Congressional Committee included Greene in its 2020 Young Guns recruitment and fundraising program. And House Minority Leader Kevin McCarthy (R-CA) has welcomed her into the Republican caucus and defended her during a November 12 news conference. McCarthy's Twitter header image is a picture of him alongside the Republican freshman class, with Greene a few spots away from McCarthy. 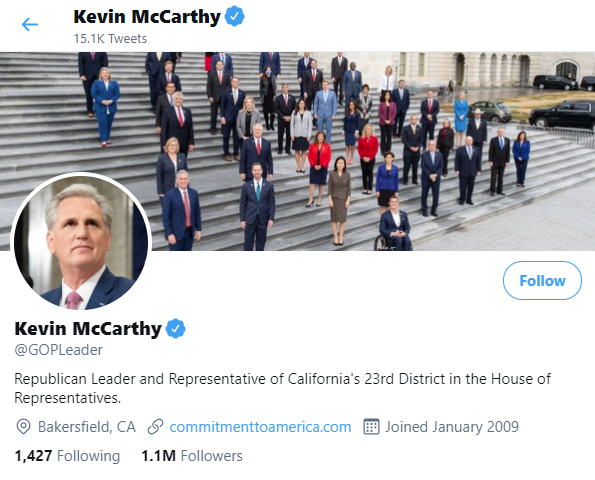 Maj. Gen. William Walker, the commander of the National Guard in Washington, D.C., delivered disturbing new testimony on Wednesday about the delay in deployment of his forces during the Jan. 6 attack on the Capitol.