In a Tuesday appearance on Fox News, Sen. Tom Cotton (R-AR) slammed the U.S. military's effort to help Afghan refugees, complaining that service members are being used as "nannies and babysitters and daycare operators" while they "should be" focusing on military training.

In mid-July, the Department of Defense announced Operation Allies Refuge, an effort "to support the relocations of interested and eligible Afghan nationals and their immediate families who supported the U.S. Government and applied for a Special Immigrant Visa (SIV)."

The department said at the end of August that it was approved to help up to 50,000 people as part of that mission, "providing essential support at secure locations, where these Afghan citizens and their families can safely complete the necessary steps for residing in the United States."

Conservatives began attacking the operation as reports surfaced this weekend that military bases were preparing for thousands of refugees.

"I've been to the border earlier this year. We saw Border Patrol officers who signed up to be law enforcement actually having to work as nannies and babysitters and daycare operators, watching out for all of the children who are showing up at the border," Cotton said, prompted by Fox & Friends co-host Brian Kilmeade, who expressed opposition to the ongoing effort to help refugees. "Now we're impressing soldiers into doing the same thing, when you're right, they should be training."

Cotton also implied that the mission to help refugees is harming U.S. military preparedness. "They should be focusing on the mission of deterring our adversaries, to say nothing of the billions of dollars this is going to cost American taxpayers," he said.

But Cotton and other Republicans have simultaneously criticized Biden for not evacuating enough people. On Thursday, Cotton and other GOP senators sent a letter to the administration demanding accountability for those left behind in Afghanistan, noting, "Our immediate priority is the safety and well-being of American citizens, permanent residents, and allies who were left behind in Afghanistan."

They have also in recent days sought to frame Afghan refugees as potentially dangerous terrorist threats. However, several federal-level and local fficials have confirmed that refugees seeking resettlement in the United States will undergo background checks as well as health screenings.

American military bases have been used as temporary housing for refugees at several points in history. They were used to house anti-communist refugees from Hungary during the Cold War, as well as for over 100,000 Vietnamese who fled Vietnam at the end of the Vietnam War.

Members of the military have expressed their support for the current mission.

"It's an opportunity to make a difference in a situation where it really is necessary: working directly with displaced nationals, helping them settle, and keeping them safe," Lt. Col. Lisa Weaver of the Washington National Guard toldthe Army's official online publication.

As Afghan refugees flee the country following the Taliban takeover, xenophobic narratives are spreading widely on Facebook. Despite the platforms' claim to "prohibit the use of harmful stereotypes" and to protect refugees from "the most severe attacks," racist rhetoric that seemingly violates Facebook's policy is rampant in both public and private groups.

These attacks on Afghan refugees come amid the American military's withdrawal from the country and the Taliban's rapid advance, which has resulted in a humanitarian crisis for more than half a million people displaced from their homes since January. With the United States' final withdrawal from the country completed on August 31, numbers show that "approximately 116,700 people have been airlifted out of Afghanistan" in recent weeks, many of whom allied with the United States over the previous two decades of war.

Now, as the U.S. occupation officially ends, users have taken to Facebook to promote xenophobic conspiracy theories and racist stereotypes about Afghan refugees as potential terrorists bent on harming the U.S. In reality, though much information has not been publicly released, government officials say they are conducting a thoroughvetting process of refugees coming into the country from Afghanistan.

Some Facebook posts assert that terrorists will attempt to sneak in alongside Afghans seeking asylum. In "Back Boris," a public group with over 41,000 members, one user wrote, "The Taliban will definitely send some of their supporters to the West posing as refugees. They will fight us in our own country." (This post received over 1,000 reactions and more than 500 comments.) This narrative has also spread to right-wingmedia including Breitbart, where an article titled "Report: Up to 100 Afghans Seeking Resettlement in U.S. 'Flagged' by Terrorism Watch Lists" has received over 13,000 interactions on Facebook, according to the social media analytics tool CrowdTangle. 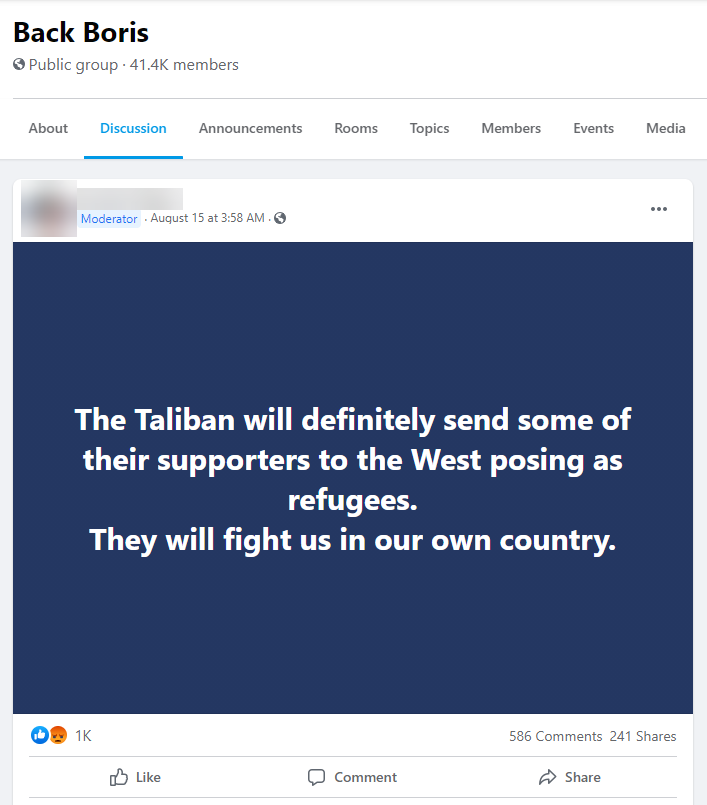 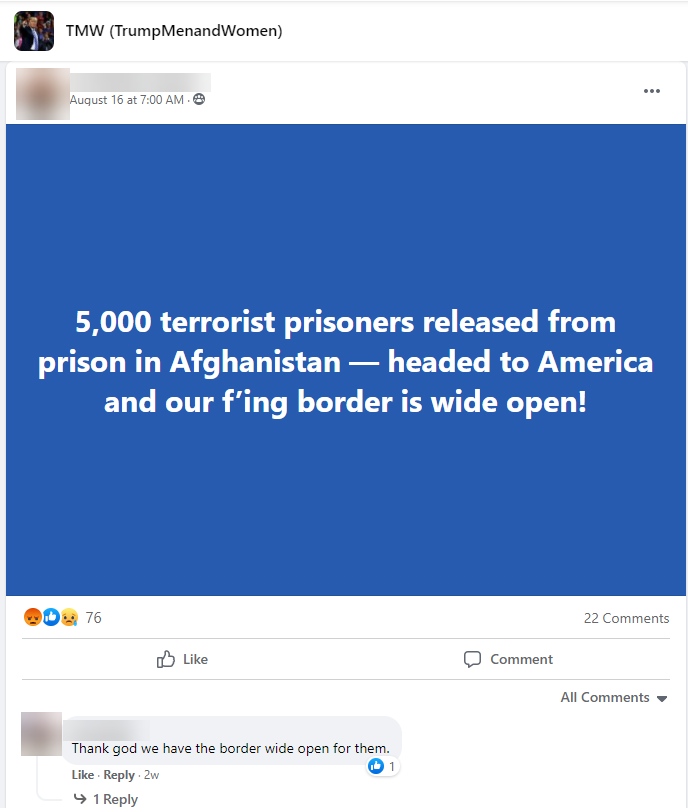 Other Facebook users claimed that Biden "surrendered Afghanistan to terrorists" and that only a small portion of people who were evacuated were U.S. citizens, claiming there was "NO VETTING. How many terrorists will Joe Biden bring to America?" Right-wing outlets like The Federalist have shared similar narratives which then spread on Facebook, with one such article accumulating over 1,700 interactions (reactions, comments, and shares) across both public and private posts on the platform. 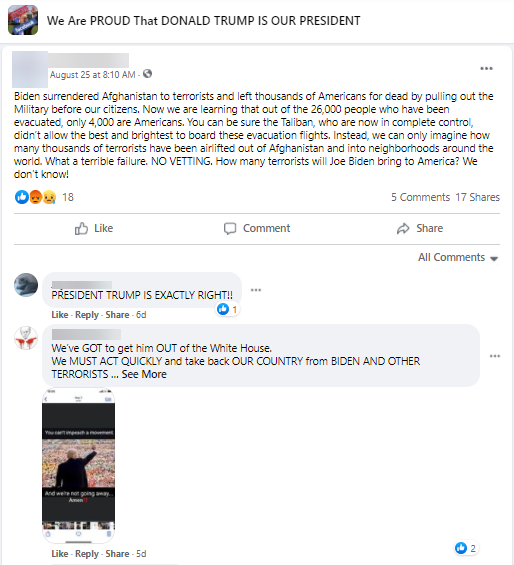 Users are also leveraging xenophobic conspiracy theories to promote other misinformedright-wing narratives, especially those surrounding COVID-19 vaccinations and the U.S.- Mexico border policy. And some have even threatened violence, suggesting that users should arm themselves to "defend" their communities against Afghan refugees. 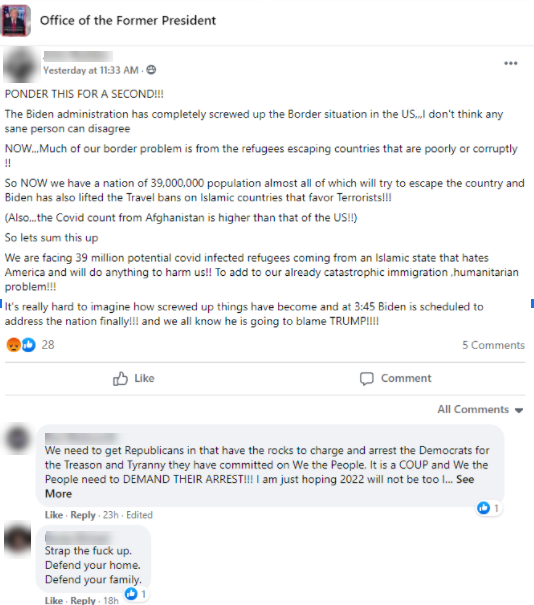 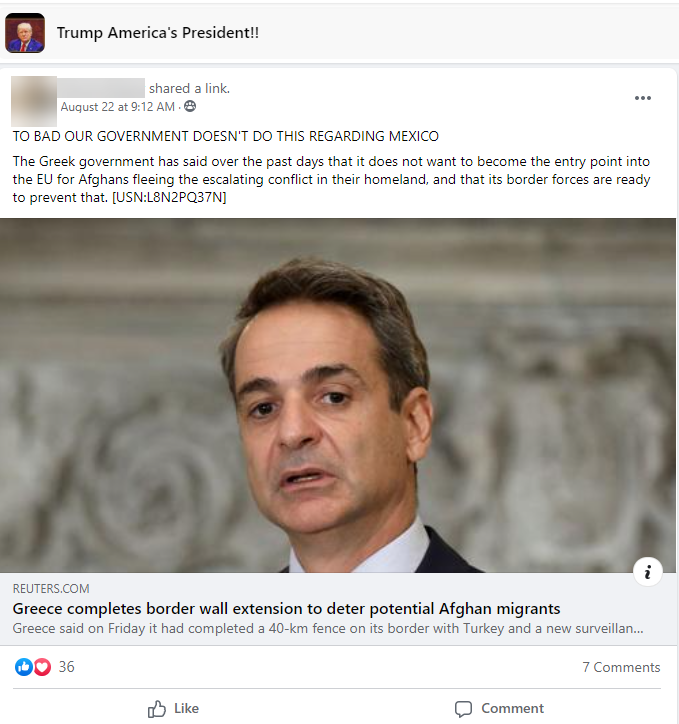 Though the platform allows discussion of immigration policies, the consistent attacks in which a whole population of people are smeared with dangerous stereotypes seemingly violate Facebook's hate speech policy, which prohibits attacks based on national origin.

Disregarding its own policies on anti-immigrant rhetoric is not new for the platform, as a 2019 study in the European Journal of Communication found:

In short, commercial platforms such as Facebook provide spaces for xenophobic, racist and nationalistic discourse online, and they shape antagonistic (Farkas et al., 2018) attitudes towards immigrants. Moreover, through their large size, they affect mainstream discourses on immigration and refugees, and contribute to a normalization of previously marginalized types of utterances, attitudes and opinions. Anti-immigration groups and publics on commercial social networking services (SNSs) also seem to amplify xenophobic and racist attitudes among their participants.

Facebook is facing no accountability for the malicious content about Afghan refugees that is circulating on its platform, once again showing the company's failure to stem the spread of misinformation, even in times of crisis.